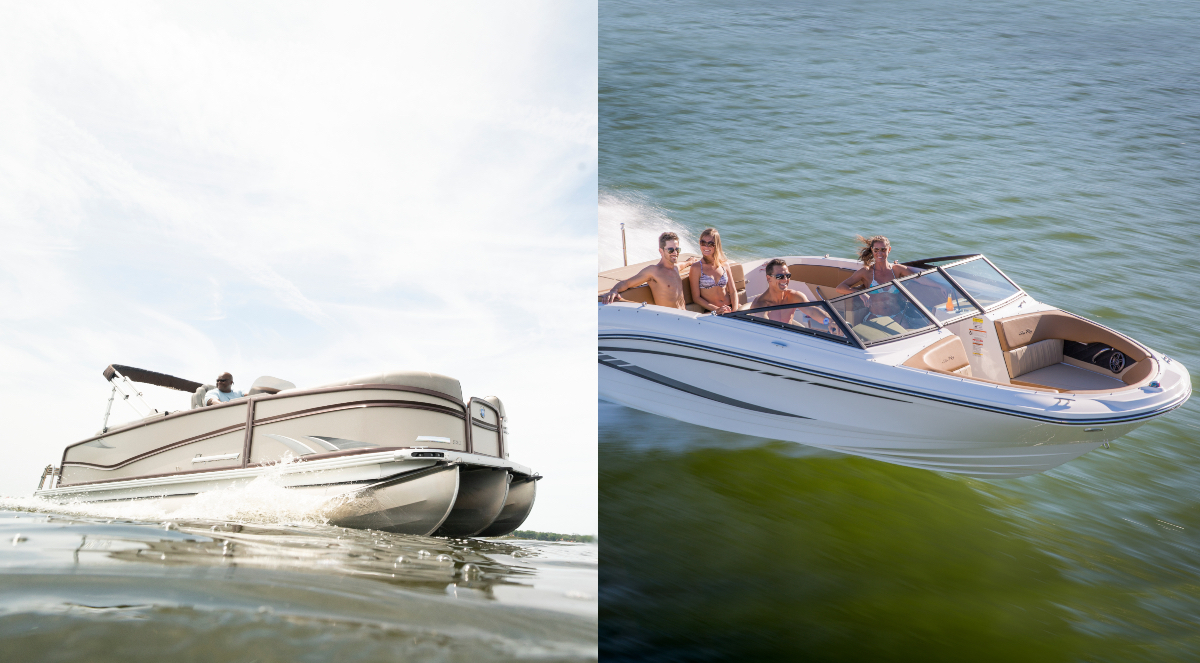 Two of the most popular boat styles—the pontoon boat and the bowrider—would seem to have very little in common. One is aluminum, the other fiberglass. One is shaped like a floating patio, while the other is shaped like, well, a boat.

What they share is extreme popularity with family boaters. The bowrider has for years been the default choice for families who wanted to get “a boat,” but recently it’s the pontoon that has captured the fancy of the boating public. Stuck on the basic decision: bowrider vs. pontoon? Let’s take a look at these two popular boat styles. 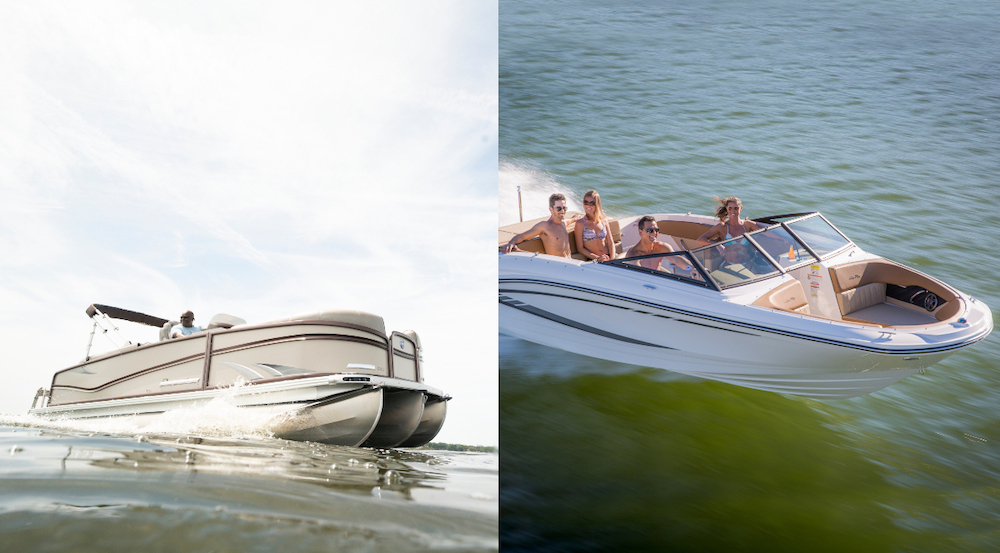 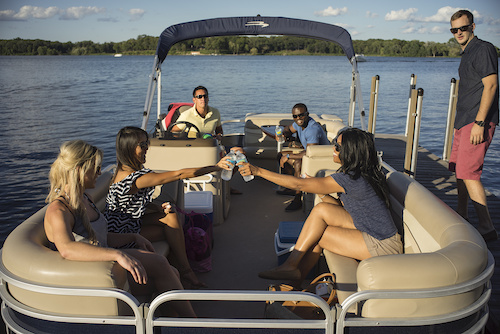 Elbow room is a big advantage for the pontoon design, simply because it's expansive, rectangular deck covers almost the entire length and width of the boat. The shape of the bowrider and its fiberglass construction means that the width of the cockpit has to be at least eight inches less than the boat’s actual beam. As the bow narrows to a point the usable space forward also diminishes, which is why many current bowriders (and its close cousin, the deck boat) feature a broader bow shape that expands the room forward of the consoles. Given equal length, a pontoon will almost certainly have more passenger capacity, both rated and practical.

Bowriders over 20 feet in length often have an enclosed head/storage compartment in the port console, which can actually be pretty spacious on bigger models. Because this compartment can usually be locked it offers somewhat secure storage for gear, which is generally not available on a pontoon. Many pontoons offer a fold-up canvas enclosure for privacy. Both boat styles can be had with aft sundecks.

For boating on larger lakes and coastal areas where choppy conditions are not unusual, the vee-hull bowrider may offer a more-comfortable and confident ride. Its hull shape can slice through chop, and it’s more responsive to trim, which can be used to keep the bow down and soften the ride when heading into the waves.

Pontoon models with three larger-diameter tubes (for example 25-inch rather than 23-inch diameter), often called "tritoons," can handle rough water with more confidence than a two-tube pontoon and are the best choice for large, busy reservoirs that can get choppy with heavy boat traffic on the weekends.

Pontoon builders have put more emphasis on performance in recent years, with the advent of triple-tube models, various configurations of strakes and fins on the tubes designed to improve handling and reduce drag, and the availability of up to 800 horsepower offered on the largest twin-engine models. That’s an extreme, and very expensive, example, however. A 23-foot pontoon with a 250 HP outboard will offer enough power to tow kids on a tube and cruise at 25 to 30 MPH, and so cover longer distances more efficiently.

A 23-foot bowrider with twin-prop sterndrive power will cruise at 35 MPH and beat the pontoon’s top speed by at least 10 MPH. The same boat with a high-performance outboard will be even faster. The vee-hull of the bowrider leans neatly as it carves through high-speed turns, while the pontoon stays relatively flat on the water, a less-comfortable attitude for passengers. 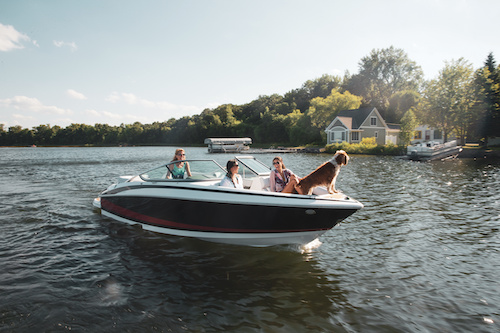 A pontoon used to be good for a sunset cruise and not much else, but today pontoon builders offer a long list of options and design choices that make it possible to set up a boat for entertaining, fishing, watersports, coving, cruising or all of the above. Galley consoles, powerful audio systems, and adjustable sun lounges are all available, with amenities running from basic to super-luxurious. Parents and grandparents who often have younger children on board like the idea of the entire cockpit being fenced in on many pontoon models.

A bowrider, especially the larger models, can also be set up for watersports with a tower, with a fishing package, and with high-performance engines and the same powerful audio systems found on pontoons. When equipped with forward-facing sterndrive, a bowrider can also be used for wakesurfing.

Length, power and luxury determine the price of both bowriders and pontoon boats, and each style of boat is offered from most-basic to hyper-luxurious, even in the same size. Your taste and budget will determine the purchase price. Both boats will have similar cost of ownership, although a bowrider with a sterndrive engine will cost more to winterize for off-season storage than an outboard. Most bowriders will be sold with a trailer, often an added cost for a pontoon.

Read Next: Pontoon vs. Deck Boat