What is Deadrise on a Boat?

Whether you’re researching the most affordable fishing boats or looking for the ultimate wake or ski boat, you may see the term “deadrise” and wonder: what is deadrise on a boat? 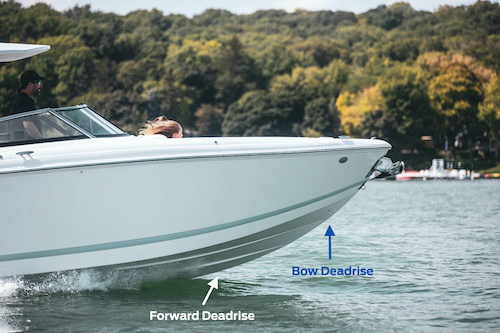 In a nutshell, boat deadrise is the angle of the hull bottom. On a flat bottom boat it’s zero degrees, and on a deep-V hull it can be as high as 25 degrees. As with most things, however, this basic explanation over simplifies deadrise on a boat and there’s much more you need to know to understand how deadrise works. Let's dive in.

Advantages and Disadvantages of Deadrise on a Boat

Different boat hull designs are best for different specific uses, and deadrise is only one major attribute of a boat hull. So while considering deadrise, always remember that it acts hand in hand with many other design traits. Boat builders strive to find an ideal mix between deadrise and those other characteristics.

That said, there are some major advantages to adding deadrise to a hull:

However, having all that V-shape in the hull does also introduce some disadvantages into the mix. Depending on a number of other design factors these may include:

Generally speaking, a smooth, dry ride is very important to a large cross-section of boaters. And while the best deadrise for rough waters is debatable, most people agree that more is generally better when you want to have a comfortable cruise. That’s why you’ll commonly see high deadrise figures of 21 or more degrees when looking at the specifications for boats that are intended to run fast for long distances through open waters, like the best offshore and deep sea fishing boats.

What is Boat Draft?

What is a Good Deadrise on a Boat? 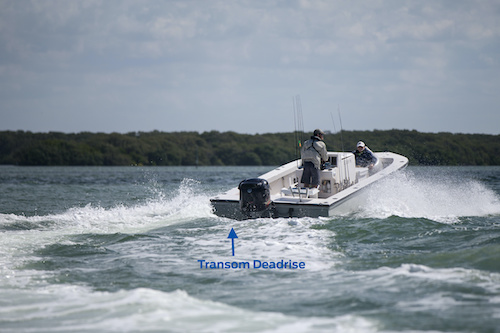 The answer to this question revolves entirely upon how you use your boat.

Since most people enjoy boating somewhere between these two extremes, “semi-V” hulls between a few degrees and 21 degrees of deadrise are often a top pick.

There are also some unusual cases in which hull deadrise has little effect.

In cases like these, adding deadrise might serve only to increase rocking and rolling, without having an appreciable effect on reducing wave impacts.

How to Measure Deadrise on a Boat

If you glance at most modern powerboats you’ll see a relatively sharp V-shape in the bow, and you might think that means they have lots of deadrise. But deadrise can be measured at different points in a boat’s hull, and the entry is not usually used as the determining factor. Instead, deadrise measured at the transom is the figure you’ll most commonly see printed in a boat’s specifications. That’s because most modern planning powerboats cut through the water aft of the entry, and while a sharp bow is important for splitting open waves, most of the impacts you’ll be subjected to at the helm occur farther back on the boat’s hull.

In some cases you’ll also see the term “variable degree deadrise.” This is used to describe boats which start out sharp at the bow and then constantly taper to less and less deadrise until reaching the transom. There are also a few boats out there which have different degrees of deadrise along the keel than they do just above it, and/or decreasing deadrise in a third section above that.

So, how do you measure deadrise on a boat for yourself? In most cases you won’t need to because it’s a published specification provided by the manufacturer. But if you wanted to measure deadrise, you could use a protractor. More common in this day and age, you can download an app that displays the angle of your phone, and simply hold the phone up against the hull of the boat (as long as it’s sitting level at the time).

Deadrise and Your Boat

Now that we’ve answered the “what is deadrise on a boat” question, we need to stress again: deadrise is just one characteristic of many in a hull design, and how a boat performs at sea depends on how all the different traits and qualities work together. Just because a boat has lots of deadrise in the hull you can’t assume it will ride smoother than another boat of the exact same size with less deadrise. That’s why taking a sea trial is critical, before deciding that any one boat is the best one, for you.

Before taking a test-run on a boat you may be considering, be sure to check out Sea Trials: Step-by-Step Checklist.