What is Boat Draft?

Draft is a term found on the specification chart for most boats, and it’s a measurement that could be very important to some boat buyers. A boat's draft is simply the distance between the waterline and the deepest point of the boat. 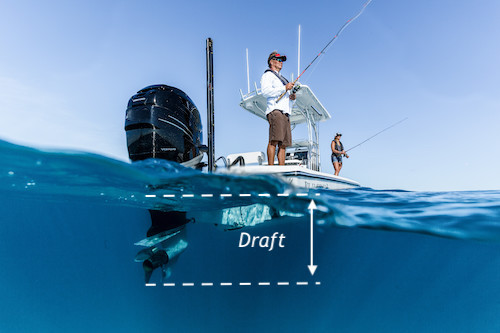 Expressed another way, boat draft is the minimum amount of water required to float the boat without touching the bottom. It’s also common to hear that a boat “draws 24 inches,” which means its draft in 24 inches.

Draft is a concern to boat owners who often operate in shallow water, which could be the entrance to a harbor or dock when the tide is out, or a channel from a home dock to open water. Anglers who fish in shallows or flats want a boat specifically designed to draw as little water as possible.

Boats powered by an outboard or sterndrive engine can be operated with the drive raised to get through shallows. Running a long distance with a sterndrive raised, however, can stress the universal joints in the drivetrain and should be avoided.

7 Tips for Boating in Shallow Water

The published draft specification for any boat should be considered “approximate” as its a calculation usually made with the boat “dry” (fuel and water tanks empty) and does not take the weight of passengers and gear into account.

Boats may be offered with engine options that can change the weight, and thus draft, of the boat. The more weight you have in the boat, of course, the lower it may ride in the water and the more it may draw.

The design of the hull will affect how much draft changes in response to boat load. Even the location of passengers—seated in the bow or in the stern—can affect the draft of a smaller boat.

If knowing the exact draft is critical, it’s best to load the boat for a typical day on the water and then measure the draft.