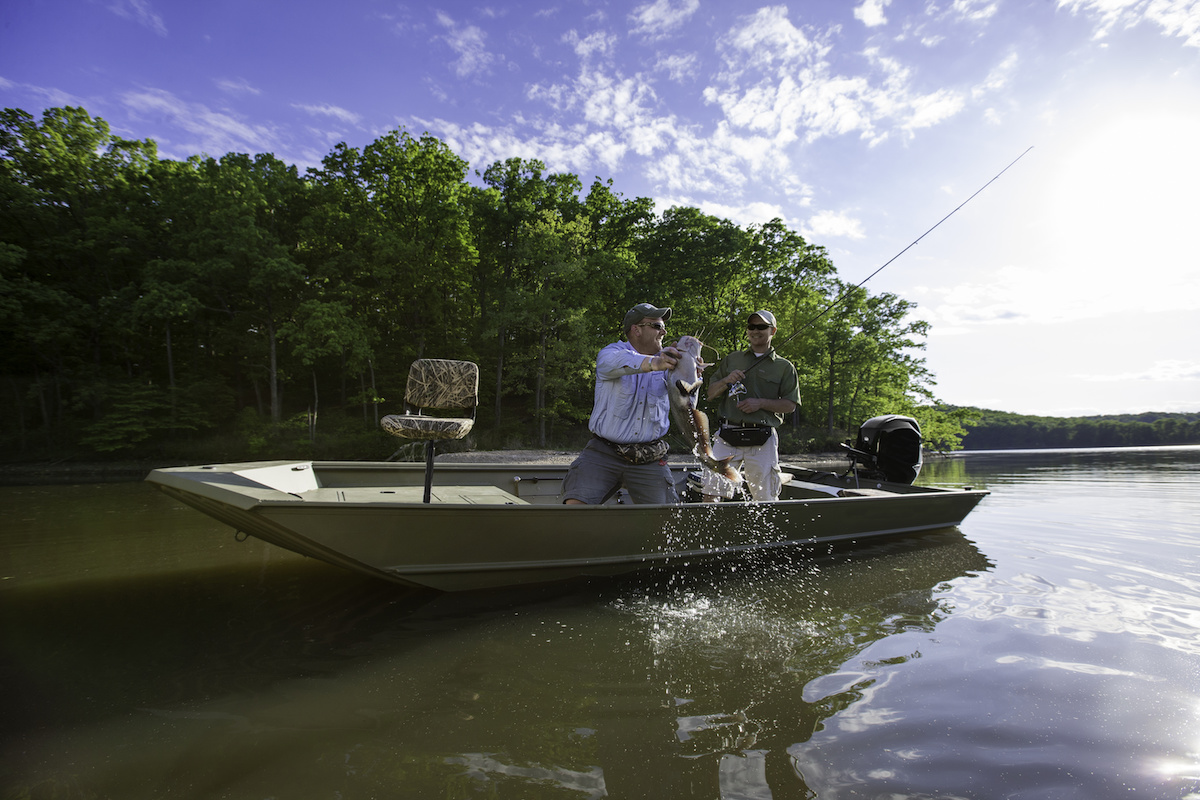 Whether you want to go saltwater fishing where no one else has cast a line, you want to go day cruising through the backwaters where you’ll be at one with nature, or you’re just exploring some cool new coastline, being able to run through the shallows will open up new and interesting waterways. But, which boats are best for the shallows? And what do you need to know to safely go boating in “skinny” water? 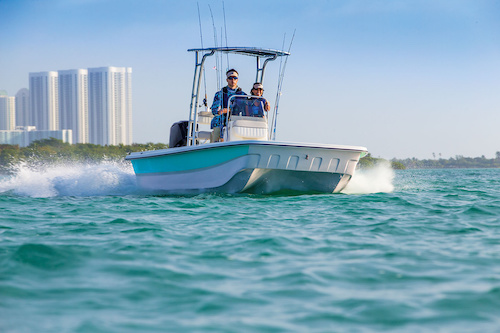 Some of the best boats designed for running through and floating in the shallows include:

The best boats for shallow water are those that are designed specifically for it. But before you can understand why a particular boat may or may not be good in the shallows, there are a few specifics we need to make sure everyone fully understands.

Just how much water a boat needs to float is described as its draft, and in the case of boats with outboards or lower units that tilt up and down, you’ll sometimes see draft listed as “engine up” or “engine down.” The draft of most boats ranges from six inches or so with the engine up, to several feet in the case of inboard boats. When it comes to boats with tilting drives, as a general rule of thumb add about nine inches to the engine-up draft to get an idea of how much depth the boat needs with the engine tilted down far enough to safely put it in gear and get the boat moving forward. In some cases, tilting an engine completely down can increase draft by well over a foot.

But there’s one more twist: the draft figures you’ll usually see listed for a boat are what’s called “static draft,” and is measured when they’re standing still. Modern powerboats also have what’s called “running draft,” which is how much draft they need once they’re cruising up on plane. When a boat comes onto plane it rises up out of the water substantially, and this can reduce draft by a matter of several inches or even more. Tilting the engine up a bit can reduce running draft even further. So a boat with a static, engine-down draft of two feet may be able to actually cruise through just a foot or so of water without ever running aground.

Aluminum fishing boats simply because they tend to be small and very light so they don’t displace much water. Jon boats in particular have extremely shallow draft, thanks to their flat bottoms.

Bass Boats tend to have shallow draft and especially shallow running draft, because so much of the boat comes up out of the water when they’re on plane.

Bay boats and flats boats that are intended for fishing shallow flats, back-country creeks and bays, and remote areas, naturally are designed to run as shallow as possible. Flats boats tend to have a bit less draft than bay boats, but bay boats usually have a bit more V in their hull and can handle bigger waves.

Jet boats don’t have drive units with propellers that go down lower than the hull, so they require less draft. It’s important to note, however, that jet boats aren’t always preferred by those who regularly go through grassy shallows because their intakes can become clogged with seaweed.

There are also some highly specialized boats out there which are intended purely for running as shallow as possible. Most are designed to serve specific fisheries. “Scooters” and similar “tunnel boats” are some examples. These are flat-bottom boats with a tunnel in the hull, which feeds water upwards to the raised propeller. Scooters are native to the Gulf coast, and are mostly manufactured by a small number of semi-custom builders for anglers who want to be able to run through mere inches of water. Tunnel boats are a bit more widespread and several builders offer models with tunnels. 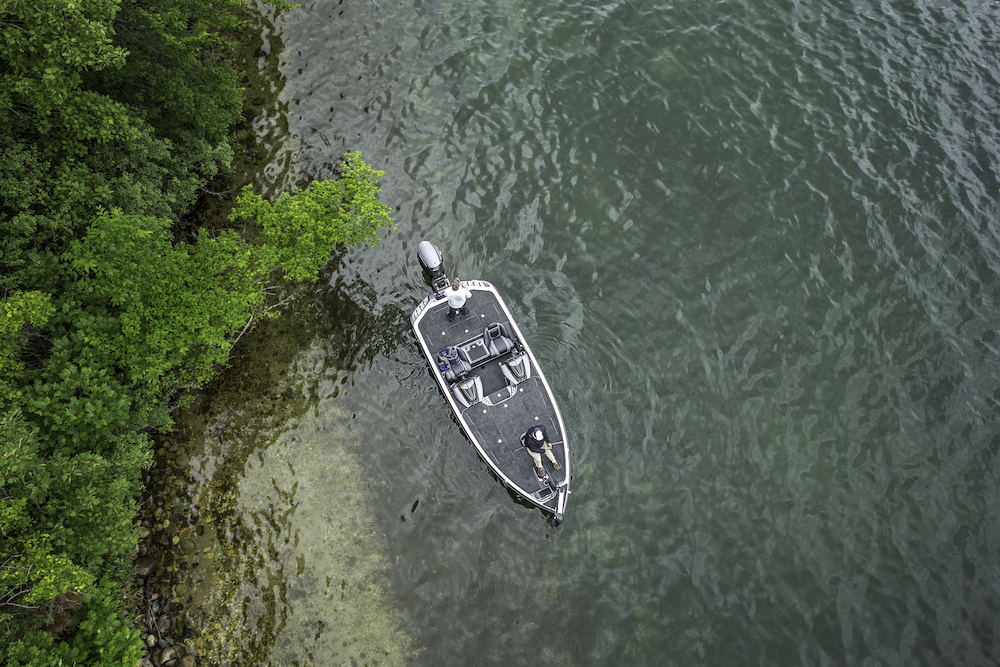 Tips for Boating in Shallow Water

Whether you have a boat designed specifically for shoal draft or not, knowing some basics about operating in the shallows is important.

1. The first and most important tip for boating in shallow water is one you can probably guess already: when you’re unsure of the depth and fear you may run aground, slow down.

It’s true that this will increase the amount of water you need, because once the boat comes off of plane you’ll then be restricted to static draft as opposed to running draft. But running aground at high speed is dangerous, can severely damage your boat, and can lead to being stranded and unable to get the boat off the bottom. If you run aground slowly, the danger is minimal and you have a much better chance of getting back off. If you’re familiar with the waters, however, and know for sure you have sufficient depth to accommodate your running draft—but not your static draft—it’s not unreasonable to keep the boat on plane to get across the shallows.

2. When idling through very shallow water, don’t trim the outdrive up as far as possible.

3. In tidal waters, check the tide before you head out.

Of course, you’ll want to know how actual water depth will relate to the charted depths (which are given in “mean lower low water,” which is an average of low tide levels). But tidal cycles are also important to know so that if you run aground and get stuck, you know what to do next. You may be able to back off, or you may want to get out and push (see Running Aground for an in-depth look at all your options). But if you know the tide is rising, you may want to simply kick back and relax, until the water level rises enough to float you free. If, on the other hand, you know the tide is falling, you may want to take measures to get it off asap before the situation becomes even worse. You’ll also want to make sure you don’t enter marginal waters, as you may not be able to get back out again later as the water level falls.

4. Keep a sharp eye out for color changes.

Channels and deeper waters often appear dark in color, while sandy shoals look like light spots in the water. But color changes can also fool you; dark-looking weedbeds, for example, may be shallower than the surrounding waters. The bottom line? If you’re cruising along comfortably it’s often wise to avoid any sort of color changes, so you’ll likely stay in the same depth range. Also keep an eye out for waves that break in the same spot over and over, which indicates bars that are shallower than their surroundings.

5. Be wary of beaching your boat on a falling tide.

One of the great things about boating in the shallows is exploring where few people go, and it may be tempting to pull your boat up on a remote beach or a pristine spit of sand. Just make sure you don’t do so as the tide’s going out, without keeping a close eye on the water level. More than one boater has become stranded for hours, after they went off beach-combing while a falling tide left their boat high and dry.

It’s amazing how many boat owners don’t actually know what their static and running drafts are. If the manufacturer doesn’t publish both, it’s a good idea to arm yourself with a tape measure and go into a shallow area where you know you can safely step off the boat and check, so you’ll never again wonder just how much depth you need.

7. Remember that on smaller boats, draft can be increased by a heavy load.

Weight can change the draft of any size boat, but on boats under 20 feet or so, a couple extra passengers can change draft by an inch or more. Similarly, a full load of fuel and gear can increase draft.

Do you hope to seek out tailing bonefish on a tropical flat? Probe a shallow cove where those big bass are feeding? Discover a remote back country beach where there are seashells no one’s even dreamt of finding? As long as you stay in waters appropriate for your boat and you have a basic understanding of how to operate it in the shallows, boating in ankle-deep water can be extremely rewarding.

Editor's Note: This article was originally published in May 2017 and updated in February 2020.