Outboard vs. Inboard: Which Motor is Right for You?

Many family boats, including bowriders, deck boats and cabin cruisers, are offered with a choice of outboard or inboard power. When both options are available, is there a better choice between the two? Let’s take a look at inboard vs. outboard boat motors, and dig deeper into the advantages and disadvantages of each type of power.

What are the Key Differences Between Inboard and Outboard Motors?

Family boats with inboard power are almost always equipped with a sterndrive (sometimes called an inboard/outboard or I/O) powertrain, which combines an automotive-type engine mounted inside the boat with a steerable and trimable drive unit mounted on the stern (the back) of the boat. The exception would be for a dedicated watersports tow boat, which has an inboard engine turning a propeller under the boat, with steering control provided by a rudder.

Sterndrives are currently offered from 200 horsepower to 430 horsepower, but many compact runabouts on the pre-owned market may be powered by a 130-horsepower sterndrive that is no longer in production. An outboard motor is a dedicated marine engine that is attached directly to the stern of a boat.

Outboards are available from tiny 2-horsepower kickers to 600 horsepower, but for family boating the range is typically 90 to 300 horsepower. As outboard motors have become more powerful, they are gaining popularity on larger cabin cruiser and day boats that once were always equipped with inboard engines. These may be rigged with three or four outboards that combined make more power than the biggest pair of sterndrive engines available, resulting in performance that was once unimaginable. 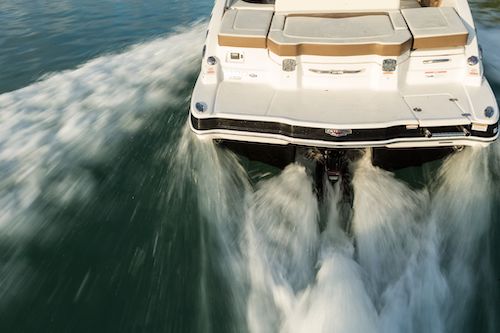 In this example, a 200-horsepower outboard will usually match the performance of a 250-horsepower sterndrive, simply because the outboard weighs less, and because that weight is more efficiently positioned behind, rather than inside, the boat. This rule of thumb holds true as you move up and down the horsepower scale. However, even with less horsepower the outboard-powered boat will often cost a little more—2 to 4 percent—than a similar boat with a sterndrive.

Because it will usually weigh less and be a more-efficient design, an outboard motor will typically deliver better fuel economy than a sterndrive. Both will require similar annual maintenance, except that in cold climates the cooling system of most sterndrive engines needs to be flushed with antifreeze solution, usually by a marine service center.

Because the entire engine is outside the boat, an outboard is easier to service than an inboard. With the boat on a trailer you can simply stand next to the outboard.

Servicing the inboard requires working under an engine hatch, often in pretty cramped confines. When an outboard is damaged or simply worn out, it is relatively easy to re-power the boat with a new outboard. Repowering an inboard boat is also an option, but a more-challenging project.

An outboard has many advantages over a sterndrive:

A sterndrive does have some advantages, however: