There are so many relatively inexpensive open-bow runabouts on the market that it’s difficult to narrow the field to the 10 most affordable bowriders. But we’ll do our best, because we know it’ll be even tougher for you to pick out just one that’s ideal for your own personal needs and desires.

First, let’s define affordable: the average American family has an entertainment budget of $3,200 a year, which shakes out to $266 a month. That would get you a boat in the $30,000 range with no money down. But even though some no-money deals do happen these days, most people will put down a payment when they purchase. So, the actual affordability bar will usually be closer to $35,000. If your budget allows for a bit more or a bit less, check out our Boat Loan Calculator to see just how much you can move that mark.

Meanwhile, recognizing that a boat’s price can vary quite a bit depending on how you want it outfitted, and that different people have different thoughts as to what constitutes affordability, let’s take a closer look at 10 bowrider boat models that meet this bar. 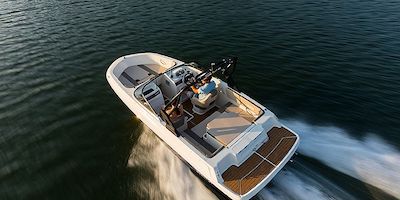 The sticker starts at a tick over $25,000 for the Bayliner VR4, which is the latest model to join Bayliner’s new VR series. At 18’10 long, however, the VR4 offers quite a bit of size for the price. It can carry up to seven passengers, has a storage length of 21’7” sitting on the standard trailer, and can also be had in a stern-drive version (see Outboard vs. Inboard: Which Motor is Right for You? for a details on the different types of marine power systems available).

One feature unique to the VR4 is what Bayliner calls its “AftAdvantage” design, which minimizes gunwale width in the cockpit and increases the boat’s interior volume. 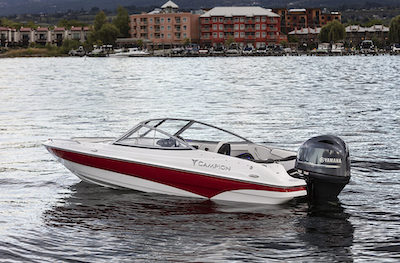 The Campion A16 OB BR is an outboard-powered 16-footer that can take up to 90 horses on the transom and stay within our affordability range. The A16 has a hidden trick up its sleeve, too, in the form of Kevlar laminate reinforcements that give it additional strength without increasing weight. It has a standard bowrider layout with pedestal seating at the helm and passenger’s console, seating aft, and seating in the bow cockpit.

You’ll also spot plenty of quality details on this model that you won’t necessarily find on most relatively low-cost boats, like cup holders, cleats, and grab handles that are stainless-steel instead of plastic; a color-coded electrical system; and flip-up bolster seats with headrests. 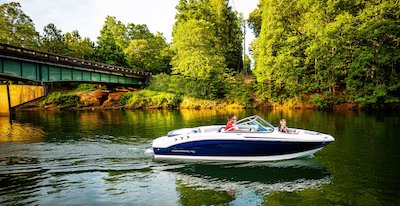 The Chaparral 19 SSI is one of the few models in this price range to come with a standard sterndrive powerplant (a 200 HP Mercury 5.4L MPI with an Alpha drive), and while it does sit on the high side of our affordability mark with a $34,195 NAP, at 19’4” long and 7’6” wide it’s also the largest boat to make the mark in this mix. It has the very biggest passenger capacity with a max rating of 11, and with the stern drive packed into the transom it also offers the largest aft sunpad of any of these options.

We also love the integrated cooler under the center aft flip-up seat, the fact that wrap-around bolsters provide padding at the sides in the bow cockpit, and the thoughtful engineering that integrates items like cupholders and stereo speaker housings. 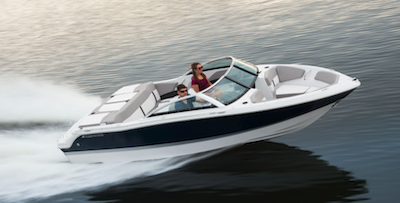 The Four Winns Horizon 190 breaks our self-imposed price barrier a bit with a $37,073 starting point, but if you don’t need a trailer it comes right back down to the mark and factory and dealer rebates can push that number down even further. And this model is well worth considering, especially if you want quality touches often found only on more expensive boats. In the bow, for example, bolsters pad the sides all the way around the cockpit to enhance comfort.

Cleats are the stainless-steel pull-up variety, the in-floor ski locker hatch swings up on a gas-assist strut, helm and passenger’s seats have flip-down bolsters, and on either side of the engine box aft-facing seats are integrated into the transom. 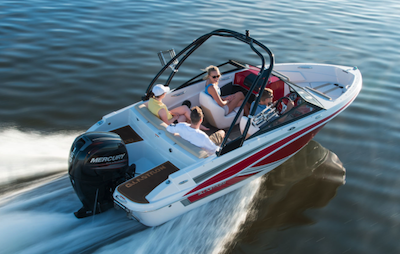 The Glastron GT 180 carries an MSRP of $30,067 and starts at a bottom line of $27,500, but if you up that ante to $29,330, you can get the Sport version which gets you enhanced graphics, custom gauges, and a swim platform mat. Either way, this 17’10 long bowrider comes with a 90-horsepower Mercury FourStroke outboard (which can be optioned all the way up to 150 horses), ComfortRide flip-up bolster seats, a Bluetooth stereo with two speakers, and a custom-matched single-axel trailer with brakes. Unlike some models this one has padded bolsters to either side in the bow cockpit, for extra comfort.

We also note that this boat has a relatively aggressive V-shape to its hull (see Boat Hull Types, Shapes & Designs) with a 20-degree transom deadrise, so you’ll be ready to take on some serious wave action. 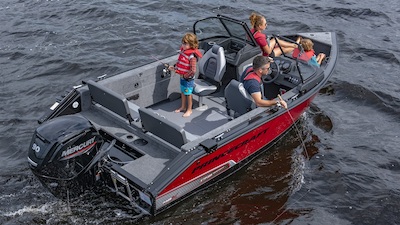 Boaters in search of a bowrider that does double-duty as a fishing boat will be interested in the Princecraft 172 Max, the only aluminum rig in this round-up, which comes with a 90-horsepower Mercury FourStroke outboard engine and a galvanized trailer for a starting price of $28,599. That package includes the family-oriented features that any good bowrider needs, like bow seat cushions, a stereo, and a Bimini top. But it also comes with extra perks that aren’t always included on other rigs, like a removable ski tow pylon and a swing-away tongue for the trailer.

The anglers in the family will love having the ability to pull off the bow seat cushions and stand on the casting deck for fishing trips, plus there’s a 17-gallon livewell, an integrated locking rodbox, and pre-rigging for a bow-mount electric trolling motor.

The Rinker 180QX is another bowrider that delivers more overall size than most competitors, with an 18’8” length overall but a price tag that starts at just a hair over $27,000. That added size means you can carry up to eight passengers out for a day on the water, and between the transom bench seating, passenger’s and helm pedestal seats, and the bow cockpit seats, everyone will have a spot to sit down.

But on top of that, this boat also comes with a number of standard features that the majority of builders leave off the list. The Kicker stereo, ski tow pylon, snap-in SoftStep deck mats, and the Bimini top with boot are all included at the list price. 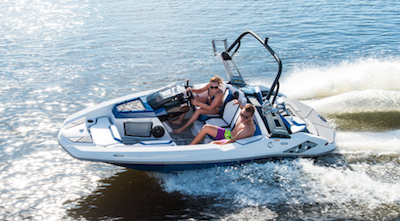 If you like the idea of owning a jet boat, the Scarab Jet 165 ID will be one to check out. Its layout is quite unconventional for a bowrider, with cockpit seating lined up along a transom that’s been pushed forward to make space for aft-facing seats above the extended swim platform. The bow’s unusual, too, with seating in front of the helm station and on the port side.

This boat also comes with the most powerful standard powerplant in the mix, a 150-horsepower Rotax inboard jet. And as anyone who’s been on a jet boat of this nature can attest, handling is utterly thrilling, with the ability to carve out hair-pin turns, blast out doughnuts, and leap across boat wakes.

Called out as one of the Top 12 New Boats Under $21K for 2021, the Tahoe T16 is one of the most easily afforded boats in our round-up. The National No Haggle No Hassle price tag is a mere $17,595, making it less expensive than all but the five least expensive cars sold in the United States today—yet everyone will agree, it’s a whole lot more fun to drive around in than a Chevy Spark.

It also has a rather unusual layout with seating across the back and in the bow, but a sunpad spanning the transom just above the swim platform. Plus, the towing weight for the entire boat-motor-trailer package is a mere 2,200 pounds. That means you’ll be able to haul it down the highway on your way to new adventures it with just any tow vehicle larger than, well, a Chevy Spark. 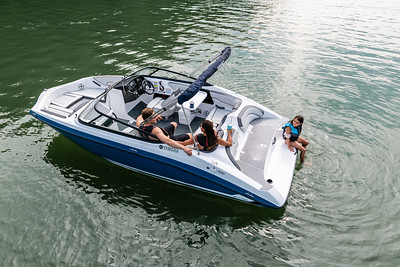 Another jet boat option in the bowrider world is the Yamaha SX190, which checks in at a base price of $30,649. Power is produced by a Yamaha 1812cc 1.8-liter high-output engine pumping water through a 155 mm high-pressure pump, and is capped off by an articulating keel that takes the jet’s awesome handling up yet another notch. There’s more that sets this boat apart from the competition, however, in that it comes with Yamaha’s Connext touchscreen control system and includes techy features like a three-position no-wake mode and cruise assist (similar to cruise control but it sets a steady engine rpm as opposed to a steady peed).

Also note that this boat-motor-trailer is complete, and if you’re willing to up the ante to $33,149 you can get the AR version, which comes with an aluminum folding wakeboarding tower.

There are countless other models that fall inside of or close to these affordability parameters, but as we noted right up front, everyone’s own personal idea of what exactly “affordable” means will vary. There are also several types of boats that are very similar to bowriders, such as deck boats and fish-and-ski boats, which people interested in bowriders may want to consider. Because no matter what model you ultimately decide on, discovering that you can afford any type of boat means discovering fun, fun, and more fun for you and your family.

Read Next: 10 Most Affordable Deck Boats