Step aboard any boat of any size, and you’ll find all sorts of electronic navigation and communication gear. Despite our ever-connected world, even in the middle of the ocean, mariners of every stripe still use nautical flags to communicate. The practice dates back to ancient times, being the most effective way to send messages in a snap. It remains equally effective today. In fact, naval personnel use nautical flags to communicate with allied forces as well as their own ships. So, too, do everyday boaters, using them to instantly notify surrounding and approaching craft of situations like a diver in the water or an emergency. 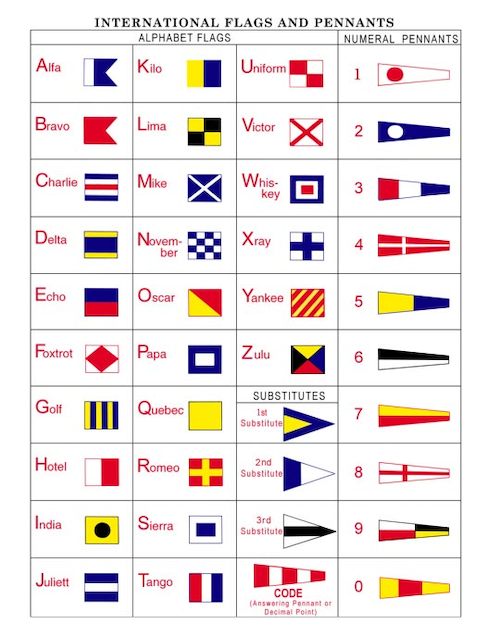 If you’re curious as to the deeper meaning behind these signals, here’s some nautical flags know-how.

1. Shapes and types are important.

Nautical flags mostly take the forms of squares, though you’ll also see pendants, which are triangular with a flat tip. You’ll additionally see what’s called substitutes (alternately called repeaters), which are triangles. Since this is a “flags 101” article, we’ll focus on the squares and pendants. They’re the ones you’re more likely to see in common boating situations.

2. Learn the letters and numbers.

There are 26 square nautical flags, each representing a different letter of the alphabet. More accurately, each represents the international code word connected to the letters of the alphabet, such as Alpha, Bravo, Charlie, Delta, and so on. In addition, there are 10 pendants for the numbers zero through nine. For the numbers 10 and larger, a boat would combine flags.

3. Colors are by choice.

The only colors you’ll find on nautical flags are black, blue, red, yellow, and white. These colors stand out quite well when seen with your own eyes on the horizon or through binoculars. Flags can be a solid color or a combination of colors, too.

Depending on the intended message, boats fly one flag or up to seven flags in a row.

In fact, signals with two nautical flags typically mean some type of distress or maneuvering issue. Three or more flags can include pendants and denote things like points of the compass, geographical signals, names of ships, time and position, as well as latitude and longitude.

While boaters around the world use nautical flags to communicate common scenarios, particular situations call for their own language. Race committees combine flags to convey a race is four minutes from start, for example, or that a course has been shortened. The U.S. Navy groups together signals in ways known only to its personnel to communicate with its fellow ships.