What Does the Keel Do? 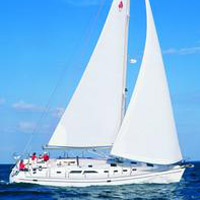 The keel is basically a flat blade sticking down into the water from a sailboat’s bottom. It has two functions: it prevents the boat from being blown sideways by the wind, and it holds the ballast that keeps the boat right-side up. That’s all you really need to know about the keel to enjoy sailing—OK, you have to know how deep it is so you don’t run aground—but in fact the keel is a pretty interesting structure.
Keels come in many styles. Traditional boats have graceful keels built into the shape of the hull; the ballast is either bolted to the bottom of the keel or placed inside it. The keel is built of whatever the boat is built of—usually fiberglass, aluminum or wood—and the ballast is lead. This is a sturdy, time-proven design, especially good for a cruising boat, which might run aground on an uncharted reef or require hauling out in a remote part of the world.
Most new sailors think the keel’s there just for ballast, but now you know better. It’s really a wing, flying under your boat.