Looking for the best nautical Halloween costume ideas? You've come to the right place. For starters, pirate costumes are just so 2003. That’s the year Capt. Jack Sparrow entered our lives with Pirates of the Caribbean: The Curse of the Black Pearl, kicking off a multibillion-dollar film franchise and spawning an endless parade of pirate costumes every Halloween.

Now, sure, to be fair, guys have been swaggering around on Halloween holding bottles of rum and pretending to be pirates since long before Johnny Depp capped his noggin in dreadlocks and lost control of his black eyeliner. It’s a fine costume if you can’t think of anything more creative—but, luckily for you, we’re here to help in that department. 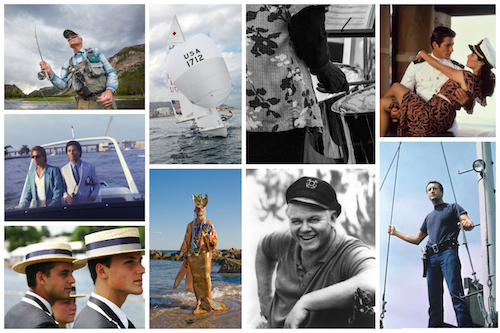 Here are nine ideas for nautical-themed Halloween costumes that we guarantee nobody else will show up wearing at the dock party.

If you can arrive at the party aboard a go-fast high performance boat, then this one will make you a legend. The classic Sonny Crockett outfit from the 1980s smash-hit TV show is as simple as a white suit with a pastel T-shirt underneath. It doesn’t even have to be a good T-shirt; if the neck hangs a little low from a thousand washings or—even better—if it’s torn, then all the better for showing off some of your chest hair a la Don Johnson in his prime. A cheap-o pair of black sunglasses from the $3 rack at the drugstore completes the look, as does a little sugar in a plastic sandwich bag that you can plant on a friend for a “drug bust.” If you can’t put together the ensemble at home, then you can find decent imitations online for about $30. Start your shopping here.

If you’re willing to invest some serious cash in this year’s costume, then head on over to the hottest jacket-maker in New York City’s SoHo neighborhood and dress yourself up like a yacht club member. Rowing Blazers is the talk of Vogue, GQ and the stylish set, pairing a hip streetwear vibe with the traditional style of blazers from crew clubs at Harvard and Yale universities. The blazers start at $295 for classic yacht-club navy, and if you’re willing to pony up more cash, you can have everything from seersucker to croquet stripe. A much more economical straw boater hat from Zappos will finish off the look.

No, not just any skipper; the skipper, the one and only, from the classic television show Gilligan’s Island. You probably already have most of the pieces that you’ll need for this costume in your closet: a cornflower blue polo shirt and a pair of khaki pants (the bulkier, the better). Add a blue skipper’s hat for less than $10 on Amazon and you’ll be ready to say hello to all your little buddies this Halloween.

Oh yes, you know who this is—he’s just better known as Richard Gere in the 1982 film An Officer and a Gentleman. Gere played Zack Mayo, a U.S. Navy aviation officer whose “get the girl” scene with Debra Winger, to this day, remains among the sexiest ever captured on film. Quite a few Halloween stores sell versions of the dress white uniform that Gere wore in the scene; add aviator glasses to this one from HalloweenCostumes.com to complete the look.

With the summer Olympic Games about to ramp up in Tokyo for 2020, there’s a Team USA store online selling all kinds of hats, jackets, pants, shorts, sweatshirts, T-shirts, socks, scarves, gloves and more. The clearance section on the website knocks as much as 65 percent off the original retail prices, which means you can afford to fully gear up in a way that not only will let you pass as an Olympic sailor this Halloween, but that also will make you Superfan No. 1 when it comes time for the opening ceremonies in July 2020.

The best part of this costume is that you get to walk around the Halloween party all night saying, “You're gonna need a bigger boat.” That’s right: It’s Roy Scheider’s character Martin Brody, police chief of Martha’s Vineyard, from the 1975 classic film Jaws. The costume is so easy to make, it’s practically not a costume at all. All you need is a dark blue T-shirt, a pair of jeans or khaki pants and, if you have it, a khaki jacket. (In the film, he takes the jacket off before shooting at the shark from the boat, so you’re good to go either way.) A half-smoked cigarette hanging out of your mouth is a must.

You’ve seen these guys from the boat for generations, making music on the beaches from the Jamaica to Trinidad. With a little bit of practice, you can sound, well, a little bit like them. Amazon sells steelpan instruments with mallets and carrying cases for less than $100; if you want to take the quality up a notch and really learn to play, then head to the Steelpan Store for the good stuff, including lesson books. Add a wig of dreadlocks and a Bob Marley T-shirt, and you’re good to go, mon.

If you don’t already own the gear that forms the basis of this Halloween costume, then you can find it all in the fly-fishing section at Cabela’s. It’s your choice on how deep you want to get into this character; start with the fishing vest full of lures, of course, and if you’re really feeling the vibe, then add the waders. You could carry a fly-fishing pole to complete the look, or go for the trout net—which also makes a handy carrying sack for cold beverages.

If you have ever dressed up as Santa Claus for Christmas, then you already have a key ingredient required for a Halloween costume of Poseidon, the god of the sea. That white beard is half the headgear you’ll need; pair it with a white wig, a crown and a trident, and you’re ready to face any threats that rise from the depths. Need to make the getup from scratch? Party City is one of several online stores that sell versions of the Poseidon look in adult and child versions.