How to Use Boat Radar

Marine radar units used to be complex, difficult to read, difficult to tune, and were based on the same old tech used for decades, but today there are several different types of boat radar—and the good news is that they’re all much easier to learn how to use than the radar of yesteryear. 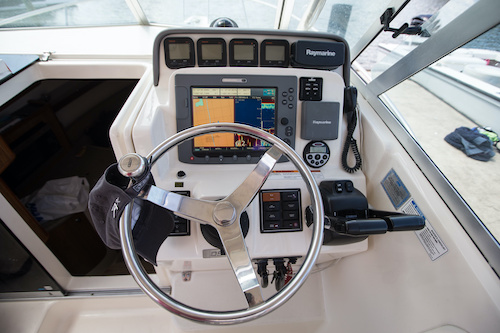 The reason? Manufacturers have made such strides with their software that tuning your unit, which you used to have to do every time you used it in order to account for different conditions, can be done automatically.

Much as is the case with modern fish finders, today’s advanced algorithms mean “Auto” mode can do a better job of tuning the picture than a human can 99-percent of the time. And with tuning out of the way, once your boat radar is set up and integrated with the electronics suite (a job often best left to the pros), after pressing the power button your biggest challenge will be interpreting the screen.

How Does Marine Radar Work?

All radar works by emitting a high frequency radio wave, and then listening for any return signals that get bounced back. When that signal does bounce off a boat, channel marker, or other solid object, some units calculate how long the process took in order to determine distance to the object, while some others make the calculation using the difference in the return’s frequency.

But radar waves aren’t just bounced back by boats and channel markers. Rain, flocks of birds, or even rough seas can reflect enough radar waves to confuse the unit—and the unit’s user. That used to mean that interpreting the screen could be extremely difficult. But again, today it’s much easier than it once was.

The vast majority of today’s units are color, and they “paint” targets on your Multifunction display’s LCD screen (or a dedicated radar screen) according to how strong a return they provide. Similar again to a fish finder, hotter colors like oranges and reds are usually used to indicate stronger returns, while lighter colors like greens and blues commonly indicate weaker returns. So large solid items like land become much easier to differentiate from softer items like a rainstorm.

How to Use a Fish Finder 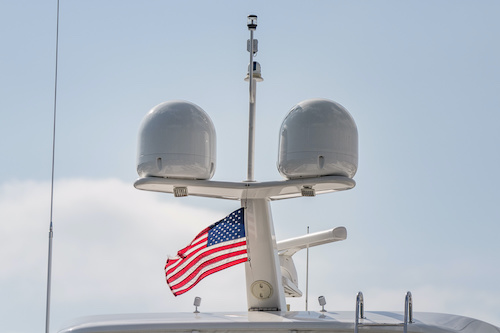 Okay: so, what exactly is there left to learn about how to use a boat radar? Here are a few key items you’ll need to keep in mind:

Setting range is often where mistakes happen, because most people’s first impulse is to set it as far as possible. But if you have a 24-mile radar, even when you’re 24 or more miles from shore, you’ll rarely want to range it out that far.

Trying to represent such vast distances on a 12- or 16-inch LCD screen, all but the most massive targets become tiny dots that you might not ever see, and if there are a lot of targets the screen will just be a smattering of tiny dots.

It will be much, much easier to figure out what you’re looking at if you drop down the range to just a mile or two—which is the area you should be most concerned with anyway, since collision-avoidance is the number-one job radar does. And when you need to identify specific structures like inlets or piers, ranging in ever further makes them much easier to identify.

Those long-range views can be helpful when you’re trying to get a return from far-off land masses or track a thunderstorm. But otherwise, shorter ranges are usually much more helpful. When you need to gather information on all of the above, you may want to use a split-screen mode with different ranges displayed, or range in and out in turn.

Understanding how to read range rings on your radar goes hand in hand with ranging in and ranging out your radar. All boat radar has rings displayed on the screen, which let you see at a glance approximately how far off a target is.

The important thing is for you to be aware of the range rings and how your unit indicates target range, so you always know how far off those targets are.

While land and channel markers are static, boats are moving targets. On many marine radar you’ll have to watch a target for quite some time to ascertain its bearing (direction of travel). This can be important in reduced visibility, so you know if there will be the potential for collision danger.

General situational awareness also plays a role in interpreting what you see on the radar screen, because different conditions can have different effects on what you’re looking at.

Sea state, for example, can cause your boat to pitch in the waves. As the bow goes up on a large wave, the radar’s transmission may temporarily pass right over a target—and it will disappear from your radar screen for a second or two at a time.

Another example is heavy rain, which can blanket a portion of your screen and hide the returns of other targets.

Whenever you’re captaining your boat you should have a high level of situational awareness and this goes for interpreting the radar, too.

What you see on-screen does depend to a degree on how your system was originally set up.

Many units can overlay the radar view over your chartplotter, which makes identifying land masses and markers far, far easier. But if your radar and chartplotter aren’t networked together or the unit’s settings aren’t appropriate, you won’t be able to enjoy that functionality. This is one of the reasons why a boat radar should really be set up by a pro. But even so, you’ll need to plan on spending some time familiarizing yourself with the unit and its settings.

Ready to Use Your Own Marine Radar System?

Boat radar can be an incredibly helpful tool, and there’s no doubt that using it has become far simpler than it once was. Even so, it takes most people a season or two to become accustomed to using radar. In this regard there’s no substitute for on-the-water experience.

Try using your radar as often as possible in broad daylight when there’s good visibility, so you become familiarized with what you see on the screen even as you can look around and see the targets that are being displayed with your own eyes. And before you know it, you’ll be using your boat radar like a pro.

Read Next: Marine GPS for Boats: Understanding the Basics