Creating motion under sail can be exhilarating. The idea that a boat, even a large one, can be moved simply by the force of the wind seems magical but it’s really basic geometry and physics. Although it can take years to learn to sail well, the basics of sailing can be summed up by how sails are structured, how boat design creates forward momentum and the changes that must be made to sail trim and shape depending on the point of sail (the direction the boat is moving relative to the wind).

Without getting deeply into the more technical aspects, let’s look at how sails are structured and how they work together with the boat to produce locomotion. Sails are foils. They curve in at the luff (the forward part of the sail) because they’re attached to a mast or a headstay wire. They are shaped like vertical airplane wings. When the wind is coming from behind the boat, sailing is simply a matter of pushing forward. But when the wind is ahead of the beam (the middle of the boat) sailing is less a matter of pushing and more of suction. 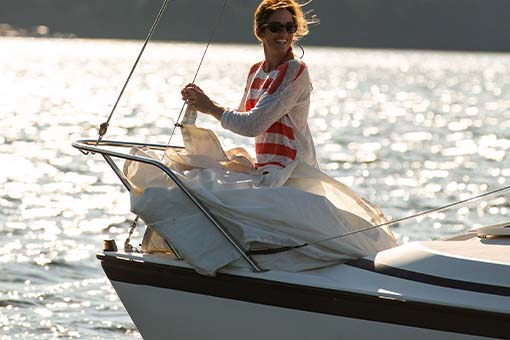 The wind on the outside of the curved sail reaches the leach (back end of the sail) slower than the wind on the inside because it travels a longer distance and this creates “lift” and “pulls” the boat forward. In other words, the foil shape, which is the curvature sewn into the sail, creates a low pressure zone in front and a high pressure zone behind so the boat moves into the low pressure. That’s why sailboats aren’t so much blown as they are sucked toward an upwind point.

Depending on the size and configuration of the sails, there’s an invisible “center of effort” where the wind acts on the boat. But without a counteracting force below the water, the boat would just be pushed sideways or make “leeway”. The underwater shape which is a combination of the keel, rudder and general lines of the hull, creates a “center of lateral resistance” which is actually what helps the boat translate the force of the wind from sideways motion to forward momentum.

How much of the lift pulls the boat forward depends on the angle of the boat to the wind or the “point of sail”. First, let’s establish a broad rule: the closer to the wind you want to sail (with the bow pointing closer to the origin of the wind), the more your sails should be sheeted in and flattened with the various control lines. When sailing off the wind or downwind, the sails should be eased out so they can billow and catch the wind and push the boat.

The points of sail beginning with closest to the wind are close hauled, close reach, beam reach, broad reach and running. The last two occur when the wind is behind the beam. Most sailboats can sail 45 degrees to either side of the wind before they “pinch”, which is when their forward momentum is compromised by sailing too close to the eye of the wind. Some performance boats can sail as close as 30 degrees before they stall. No boat can sail directly into the wind and that scenario is called being “in irons”. Although it depends on various factors, the fastest point of sail with a standard headsail and mainsail is usually a beam reach or when the wind is coming at the boat at 90 degrees.

A boat “tacks” or changes direction by having the bow come through the eye of the wind and then settles in on the opposite tack or side. A boat gybes when the stern of the boat comes through the wind when it’s sailing downwind. Gybes can be dangerous because the boom and mainsail swing violently from one side to the other putting a lot of strain on the entire rig as well as the sails. That’s why it’s important to sheet in and then let the main out in a “controlled gybe”.

Types of wind and sails

When sailing upwind, you’ll want to have the sails as flat as possible because this creates the most efficient foil. Laminated sails made of modern fabrics stretch less and therefore are “performance” sails that can get flatter. Typical cruising sails are made of Dacron, tend to have a deeper cut and won’t perform as well to weather.

It’s easiest to learn to sail on a small boat, which reacts quickly to changes in wind velocity and direction thereby providing immediate feedback. It’s also easier to learn in sailing dinghies that have only one sail before graduating to a boat with a main and headsail. The basics can be learned in a day but perfecting sail trim and seeking out the best boat performance generally takes years to master.

Read Next: What Do I Need on My Sailboat? 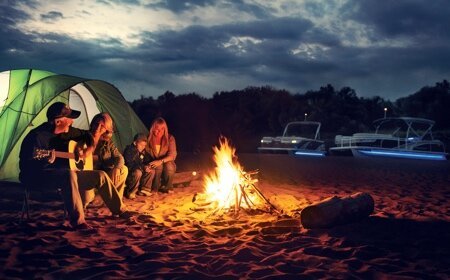