Go-Fast Boats: Beginner's Guide to the World of Speed

Speed on the water is a rush like no other, and if by chance it captures your imagination you’ll likely spend the rest of your powerboating days chasing it. Not everyone who enters the boating world discovers his or her inner speed gene. But for those who do, it quickly becomes a passion—and likely a lifelong one. 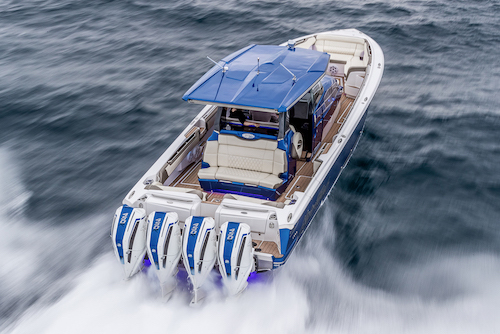 Here’s the good news for would be go-fast powerboat owners: You’ll know immediately whether you love or hate the sensation of speed on the water—and all the challenges and responsibilities that come with it. As the water rushes by and the shoreline blurs, you’ll either be thrilled or terrified. There’s nothing in-between.

But assuming you end up on the “love” side of the equation, there are more than a few things that you, as a novice getting into go-fast boating, need to know. What follows is a quick, though by no means comprehensive, question-and-answer guide. It won’t provide everything you need to know, for the education of a powerboat owner, especially in the high-performance realm, never stops. But it will help you understand some of the basics.

Picture “one of those Cigarette boats” and you have a classic V-bottom. Though most are powered by inboard stern-drive engines, a few are offered with outboard-engine power. Their lengths range from 20 to more than 50 feet. Most often, they have single or dual engines. They range from bare bones, meaning a steering wheel, a throttle and two gauges (speedometer and tachometer), to plush with multiple GPS units, front and rear video cameras, FLIR systems, monster stereos, plus cabins and more.

More popular these days, however, are V-bottom-based “center consoles” with open-cockpit layouts with bolster seats and lounges from bow to stern and tiny-to-generous cabins inside the consoles. Most high-performance center-consoles are powered by two to four outboards. Top speeds range from 60 to 85 MPH.

Today’s most popular go-fast catamarans range from 28 to 52 feet. Powered by twin inboard engines up to 1,750-HP, they can reach 180 MPH and beyond. Once again, it goes without saying—but still needs to be said—that boats in this rather extreme category take years of experience to learn to handle safely.

A sport catamaran, meaning outboard-engine-powered cats from 28 to 38 feet long, are the hottest things in the go-fast boat segment these days. Equipped with twin outboard racing-style engines, the fastest top out at 130 MPH. Thanks to the outstanding reliability built into today’s outboards and overall ease of use as compared to their larger, higher-maintenance stern-drive counterparts, sport cat popularity has exploded in the last five years.

What is a Poker Run?

How Much Does a Go-Fast Boat Cost?

If you’re looking at an entry level new go-fast powerboat, you can expect to spend no less than $100,000. That might seem like a lot of money and, in fact, it is, but it’s not out of line with the pricing in rest of the powerboat world (more than a few ski/wake tow boats list for 50 percent more than that).

Of course, you spend far less than $100,000 in the pre-owned go-fast boat market. On the flip side, you can spend more than $1 million on a new custom creation.

Being new to go-fast boating and excited about the world you’re about to enter, this you forget to ask this question. But it’s an important one, so we’re asking it for you.

Longer answer: Like all forms of powerboating, the high-performance segments includes costs beyond the boat, the most obvious one being fuel. High-horsepower marine engines demand fuel, often higher octane and hence more-expensive fuel, to make power. And they tend to burn a lot of it. By automotive standards, five miles per gallon is appalling. But powerboating—all powerboating—it’s world-beating, even for outboard engines.

Other costs include insurance, which is higher for go-fast boats than it is for boats in other segments. The faster the boat, the more expensive and expensive and difficult it is to insure. Though high-performance marine engines, especially Mercury Racing’s inboard and outboard offerings, have become far more reliable than they once were, they still require more routine maintenance than the lower output engines found in general-use powerboats.

How fast can high-performance boats go?

To make things simple, we’ll define any powerboat that exceeds 70 MPH as a high-performance boat. These days, there are plenty of boats that can run more than 120 MPH and several models that—with enough horsepower—can top 180 MPH. It should go without saying, but still needs to be said, that the highest tier of performance boats take years of experience and a careful, methodical progression to learn to handle safely.

How do I get involved in high-performance boating?

If your family owned a powerboat, there’s a good chance that you might end up owning one someday. Lifelong boat owners typically were exposed to the activity as children. To the outsider, the whole “powerboating thing” can seem intimidating, whereas those who grow up around boats have a hard-coded comfort level with all that boating entails.

Your best bet if you think a go-fast boat appeals to you? Get a ride in one. There are more than a few dealers around the country who can make that happen for you. If you like it, you’ll move forward. If not, move on.

Assuming you like it, you’ll need to take more rides—and we mean a lot of them—with dealers and builders. Don’t be afraid to ask hard questions and don’t be afraid to go elsewhere if the folks introducing you to the go-fast boating world can’t answer them.

How do I learn to drive (and safely handle) a go-fast boat?

Volumes could be written about the progression of go-fast powerboat ownership, but the most simple and solid path is to start small and work your way up.

So be patient. Your life and the life of every passenger in your boat depends on it. And get instruction, whether it be from the manufacturer such as MTI or Nor-Tech or an outfit like the Tres Martin Performance Driving School. Listen, learn, ask lots of questions—there are no dumb ones—and take it slowly.

Nothing is without risk. Your job, through a slow progression to experience and competent instruction, is to do your best to minimize it. In time, you’ll be going plenty fast. That’s just what happens when the aquatic speed bug bites.