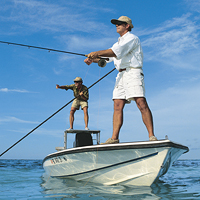 Trolling motors are generally small electric outboard motors, frequently mounted on the bow, used to quietly maneuver into fishing areas. Serving as alternate propulsion on fishing boats and the main engine on small sailboats, canoes, and other small craft, most trolling motors operate on external 12-volt deep cycle batteries. Trolling motors must endure frequent on and off cycles and often run for just a few seconds to maneuver slowly or to hold a position. Propellers have two, three, or four blades, and weedless props have specially shaped leading edges to keep from fouling in the weeds.
Trolling motors are rated in pounds of thrust; 72 to 75 pounds of thrust equal about one horsepower. The motors range in size from a lightweight four-pounder that generates less than 13 pounds of thrust to a relative behemoth pushing more than 200 pounds. Experts recommend having five pounds of thrust for every 300 to 400 pounds of vessel gross weight. The lightweight four-pounder is obviously for kayaks, canoes, dinghies, or rafts.
More deluxe motors sport power indicator lights, rugged stainless steel shafts, five forward and two reverse speeds, and can be changed from a transom mount to a bow mount. Engine mounted trolling motors offer another alternative and can turn recreational runabouts and pontoons into fishing boats. The motor mounts permanently on the cavitation plate of an outboard or inboard/outboard (I/O) lower unit. It stays out of the way, is easy to deploy, and will not interfere with the boat or engine’s normal performance.

Saltwater trolling motors must be corrosion proof and offer precision boat positioning and infinite speed control for ideal bait presentations. Some motors are fitted with a sacrificial anode that protects the motor from galvanic corrosion.  Saltwater attacks the zinc anode that can be easily replaced when necessary.  Newer motors feature stow/deploy mechanisms that enable you to easily raise and lower the motor in and out of the water.

Bow-mounted motors may be equipped with a mechanical or electrical pedal for hands-free operation or cordless remote controls that can be operated from anywhere on the boat. A momentary switch enables for short power bursts and a bypass switch enables running the motor on constant high speed. Some trolling motors even have autopilots for anglers who like going by themselves.
Read more about trolling motors.