AKA: Redeye, redeye bass, goggle eye, rock sunfish
This species of freshwater fish is not really a bass, but a member of the sunfish family, associated with bass because of its rocky habitat.

About 6 to 8 inches and weighing less than a pound.

Rock bass can be found in all the Great Lakes and Saint Lawrence River system, Wisconsin, the upper and middle Mississippi River, and down to Missouri, northern Alabama and Georgia in the south, as well as from Québec to Saskatchewan in Canada.

Rock bass prefer clear, vegetated and rocky lake margins and stream pools. Their favorite habitat is clear, cool to warm waters, with gravel or rocky bottoms, and some vegetation. Rock Bass species are usually found near stone-armored shorelines and breakwaters.

Rock bass mature in three years can live as long as 10 years. Spawning occurs from April to early June in warm waters ranging from 55 to 60 degrees F., with females laying from 2,000 to 11,000 eggs. Males can become aggressive defending their territory while they attract and hold females.

Rock Bass is frequently seen in groups, particularly near other sunfishes. Anglers take them using much the same methods that work for other bluegill species. For more tips, read these bass fishing secrets written by professional bass fishermen.

If you’re new to bass fishing, or a seasoned angler looking for a new bass boat, see our section on bass fishing boats.

Other Types of Bass: 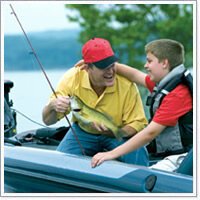 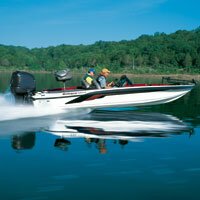