Wake boats designed and equipped specifically for watersports like wakeboarding and wakesurfing are highly specialized craft, so they can be rather expensive compared to other types of boats of similar sizes. That doesn’t mean, however, that there aren’t any affordable wake boats out there for all you watersports lovers.

In fact, the boats were about to look at list for under $100,000 and are among the 10 most affordable wake boats on the water today.

With a MSRP of $73,795 the Axis A20 is a turnkey package that’s ready for action right out of the box. A wave-making wedge, Surf Gate, and a whopping 3,810 pounds of ballast ensure that you can make a radical wake, and power comes courtesy of a Malibu Monsoon M5Di 360 HP inboard engine.

The package also includes a tandem axel trailer and a mooring cover. Don’t be fooled by the A20’s relatively small size, however, because it can take up to 11 adults out for the ride. 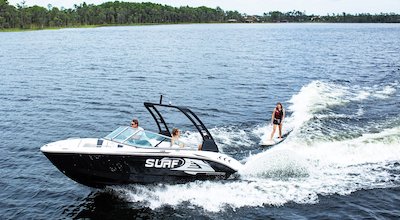 List price for the Chaparral 21 Surf is quite low compared to most dedicated watersports boats, at $54,616, yet it provides 21’ of length, a 12-passenger capacity, and all the features of Chaparral’s SSi line. They make quite an effort in making sure the boat’s sporting abilities are up to snuff, including techy touches like a Medallion Viper II touchscreen display that allows you to create and then store your perfect wake-making mode.

The Chaparral utilizes a Malibu Surf Gate to generate its big curls, along with the propulsion provides by a Volvo-Penta Forward Drive. That means the 21 Surf also enjoys the trimming and handling advantages of a forward-facing stern drive.

If you’re in the market for a wake boat that’s larger than most other options falling into our “affordable” category and can seat up to a dozen people at the same time, the 24’4” Four Winns HD8 Surf will do the trick. Starting price is $93,837, a number often exceeded by significantly smaller boats of this genre. And that size matters, particularly when you consider that few wake boats can boast of creature comforts like an enclosed head compartment with a sink and lighting, a huge aft convertible sunlounge, and an onboard 12-gallon freshwater system.

In the wave-making department, the HD5 Surf utilizes a Volvo-Penta Forward Drive coupled with wake enhancement tabs, a ballast system, and a touchscreen helm control with speed control. 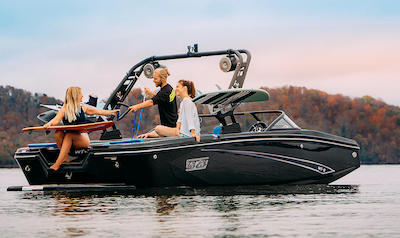 Heyday specializes in creating affordable and purpose-built boats for wake sports, and the 22’6” long WT-2DC will prove ideal for those who enjoy towed watersports like wakeboarding as well as wakesurfing.

It comes with a (folding) tow-tower so you have an elevated tow-point as well as the transom tow ring, and has a tri-hull-style hull designed to displace water in such a way as to boost its wave-making abilities. Add in the 1,800-pounds of onboard ballast and an angled transom that puts a curl to the wake’s lip, and you’ll be riding that ramp like a pro in no time. MSRP for the WT-2DC is $53,731. 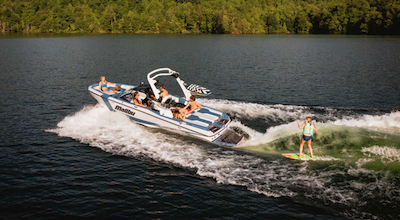 At a hair over $87,000 the Malibu Wakesetter 21 VLX may cost a bit more than some of the boats in this roundup, but it’s one of the most affordable ways to get into a premium-level wake boat. Malibu is known for building top-tier boats with exclusive innovations like their Surf Gate, Power Wedge III, and the mOS operating system running behind a touchscreen to provide digital controls of customizable wake presets, ballast control, and more. There’s even an available Surf Band wrist remote that lets you modify the wake while you’re riding it.

The 21 VLX has all of these perks plus their “Wake Plus/Diamond” hull, which allows you to transition from wake sports to traditional water skiing mode in no time. No matter what type of watersports you enjoy the 21 VLX will get the job done—and in fine fashion. 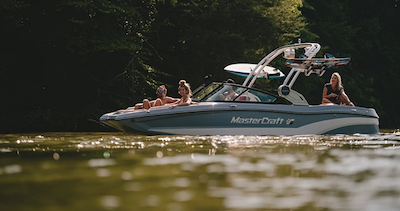 MasterCraft is a premium wake boat brand, but they come in just under the $100,000 barrier with the XT20. It comes rigged with the GEN2 Surf System, including wake-shaping tabs controlled by the touchscreen at the helm with preset surf profiles for riders of different skill levels plus custom wave-making abilities.

This model also has a few unusual tricks up its sleeve, like a ZFT Tower with spinning board racks and a center cockpit seat that converts to face aft, so you can lounge as you watch those athletes perform their tricks in the wake. 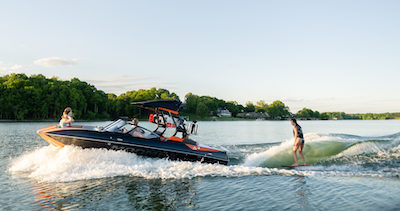 The $68,700 Moomba Mondo can hold a whopping 3,700 pounds of ballast to create some mega-wakes for on-board antics. It also has the ability to create repeatable wakes that fit specific rider’s preferences, thanks to the multi-sensor AutoWake system (which tracks pitch, roll, water displacement, and predicted wave amplitude) and Flow 2.0 contoured wave-making plates. Control over these systems and more come via a seven-inch touchscreen helm interface.

We also note that the Moomba has a slick split-pad walkthrough transom design which makes it easy to get from the cockpit to the swim platform and back, yet still lets you takes advantage of the top of the motorbox (by adding a filler cushion) as a full-beam sunpad. 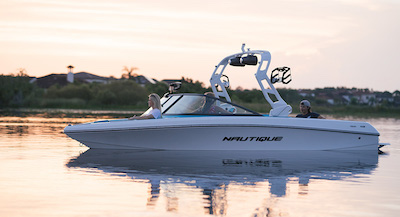 The Nautique 200 is a dubbed a “multisport” boat, and whether you’re into water skiing, wakeboarding, or just sling-shotting the kids around on a tow-tube, you’ll appreciate the ability to get into a tournament-level tow-boat for $83,174. The Nautique 200 has an unusually open floor plan, with flanking seats in the bow (a filler cushion can turn it into a playpen), a helm seat, an aft-facing passenger’s seat, and removable transom seating that can create a bench all the way across or make way for a walkthrough.

The 200 also features Nautique’s HydroGate, which fine-tunes the running surface to perform best for whichever type of watersports you’re engaging in.

Yes, we know, the Tige Z3 breaks our affordability barrier by $526. But as we all also know boat pricing can vary quite a bit depending on geography and the market, and we’re not about to cut the G3 out of this mix over a measly few hundred bucks. That’s because this is the new version of a classic, Tige’s all-time best-selling watersports boat. Plus, this boat’s bigger than most in the running at 23’6”, with seating for an amazing 16 people. And that seating is certainly one of the model’s strong suits, as it incorporates a huge lounger to port, a sunpad in the stern, and aft-facing transom seats that will make watching the sun go down on the lake a pleasure.

Plus, when it’s time for a bit more excitement the TAPS 3T wake system deploys trim plates to shape the wakes for surfing, jumping, and general waterborne fun. 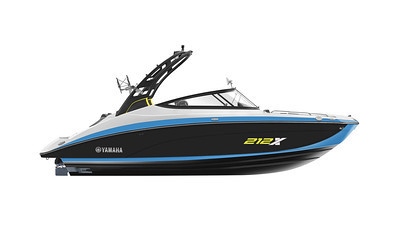 Jet boat lovers in search of a wake sports boat will be checking out the Yamaha 212XE. Starting at $64,894, not only is this the only jet boat in our round-up, it’s also the only boat with twin engines. The 212XE has a pair of 1.8-liter Yamaha TR-1 engines under the hood, which blast water out through 155 mm high-pressure pumps to create their thrust. Wave-making abilities depend upon a 1,100-pound ballast system, while a folding aluminum tow tower with swiveling wakeboard racks rounds out the hardware.

Software plays a role too, however, with the Yamaha Connext touchscreen control system providing sport-enhancing features like Cruise Assist speed control and user-defined profiles for speed, acceleration, and ballast. 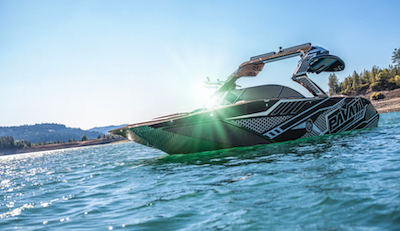 Affordability is in the bank account of the beholder, and while most people might not consider a $315,999 starting price “affordable,” to some well-heeled wakesports aficionados it won’t cause a moment’s notice. If price is not an issue and you want to run the most eye-catching and extreme watersports boat on the lake, the Pavati AL26 may well be of interest.

This 26’8” long boat isn’t just bigger than the rest, it’s also made of billet aluminum rather than the usual fiberglass. The interior can be customized to your own personal taste as can exterior graphics, and the boat’s rigged with both bow and stern thrusters. Even the amount of ballast the Pavati packs is rather extreme, tipping the scale at 5,988 pounds—more than enough to work in concert with the Rip Tide surf tabs, which displace 2000-pounds of water on their own, to create the ultimate wakes.

Read Next: 5 Most Affordable Ski Boats