Pontoon boats are known for being the ultimate on-water party machines, but in truth they’re that and a whole lot more. In many ways pontoon boats are also the ultimate in luxury afloat, they’re the ideal day-cruisers, they make excellent watersports platforms, and pontoon can even make the grade as fishing boats. There is, however, always the question of affordability to consider. 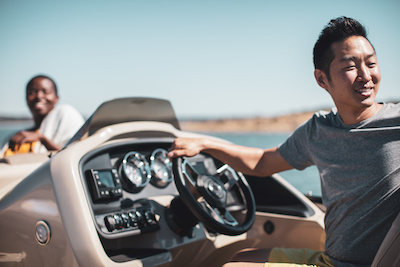 Just what makes a pontoon boat affordable? That depends on your own personal financial situation. So let’s look at this from the perspective of the average American household, which has an annual income of a bit above $60,000 and a typical entertainment budget of about $3,200 a year (2017 numbers according to the Bureau of Labor Statistics, the latest data available).

Since we all know that nothing is half as fun as messing around on a boat, let’s apply that monthly entertainment expense of about $266 to your pontooning options. It will get you a $30,000 boat loan with a seven-percent interest rate (that you can likely beat if you have good credit), at a 15-year term with no money down (you can use our Boat Loan Calculator, to figure out the exact payment amounts on different loan amounts and down payments).

Using that monthly expenditure as a ceiling, all 12 of these pontoon boats count as affordable. 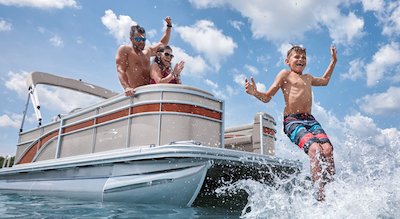 The Bennington S 188 SL can be had with the maximum 60 horsepower outboard and still leaves about $4,500 in the budget to add other accessories and upgrades. Not that you’ll need to spend it, because in stock form the boat has oodles of comfy seating (an L-shaped lounger aft, a sofa to starboard, another double-wide seat in the port bow, and a helm chair) wrapped in two-tone Simtex vinyl; woven vinyl flooring; a 10’ Bimini top; and a Kicker KMC45 stereo system.

The S 188 SL has an 8’0” beam and a hull weight of just 1,663 pounds, so it’s easily trailered, too. And construction perks include under-deck spray deflectors, extruded splash guards, and solid rounded keels. 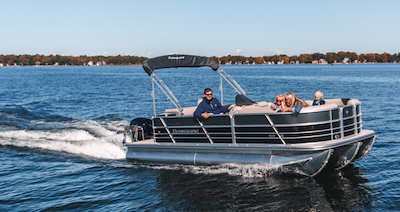 If you’re not too worried about top speed you can opt for a bigger, better boat than average and get a relatively small powerplant, like a Berkshire 20CL LE rigged with a 25 HP Suzuki outboard. That includes plenty of goodies, including the premium vinyl package, a Bimini top and boot, a Kicker KMC45 stereo system, and a mooring cover. And with the Berkshire, you can customize the boat’s interior and exterior color schemes so it looks exactly how you like it.

What sets this boat head and shoulders above the crowd, however, is construction. The 20 CL LE features the same honeycomb composite deck as Berkshire’s much more expensive models, and they also fit out the 20CL LE with stainless-steel pieces and parts (cleats, rail bracings, cupholders, telescopic boarding ladder, etc.), which is normally something seen only on higher-priced pontoons or models that have been upgraded for saltwater use. 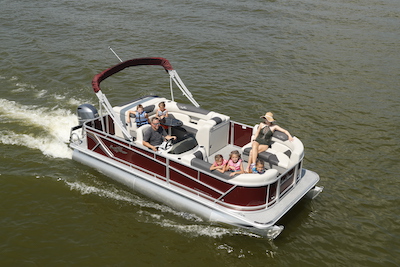 Most pontoon boats have oodles of seating, but that comes at the cost of deck space. If you’d like to have some open deck in addition to the couches and loungers, the Geneva Cruise 20 CRS ($29,883 with a 60-horsepower Yamaha on the motor mount) is likely to catch your eye.

This model features facing couches forward and a big L-lounge with dinette aft to port, but the starboard side is kept wide-open aft of the helm chair. That means you’ll have plenty of elbow room as you get the tow toys ready for fun, or climb back aboard after a dip in the lake. Added bonus: add the third tube and this boat can take 200-horsepower, seriously amping-up performance and speed.

You’d rather have a smaller boat that’s loaded to the gills with every conceivable option and accessory, as opposed to a larger one with less glitz and glam? Then it’s time to check out the Cypress Cay C 171, which sits under the $18,000 mark with a 50 horse Mercury FourStroke on the transom. That leaves plenty of room in the budget to check off the box for each and every option.

The C 171 Cruise also offers a seating arrangement that’s a bit different from the norm, with an aft forward-facing couch, helm and passenger’s pedestal seats, and a pair of forward loungers. So despite this boat’s relatively small size, all eight passengers still have a comfy spot to plop down. 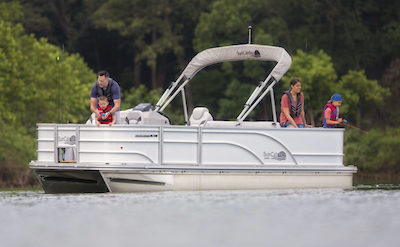 Anglers will be interested in pontoons like the Suncatcher Select 18F by G3 Boats, which can be had under our budgetary bar with a 70 horsepower Yamaha F70 but comes with an array of features for both fishing and fun.

The stern fishing platform includes a built-in livewell, a pair of rodholders, and vertical racks for four rods; there are vertical racks for six more rods and reels in the bow; fishing seats are on swiveling pedestals; and the boat’s pre-wired for a bow-mounted electric trolling motor which can be added on as an option without pushing price out of our range. 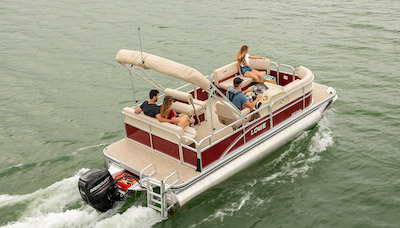 Watersports fans, the Lowe Ultra 200 Cruise will be of serious interest to you. You can step into this roomy 21’4” long boat and race across the reservoir with 115 horses on the transom, keeping price down in the $24,000 range. That leaves more than enough money left over for the optional ski tow arch plus a set of wakeboards, water skis, and a tow rope.

And already included in the package you’ll be getting an aft swim platform with a four-step reboarding ladder, seating for 10 people, and a Bimini top. Tell the kids to hang on tight—this is going to be fun. 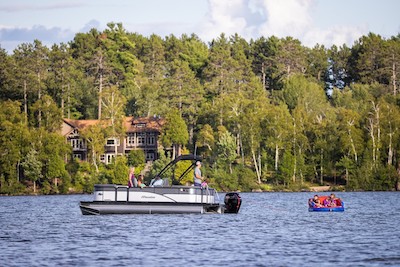 Getting the Manitou 20 Aurora LE with a 40-horse outboard will put the purchase price right at our affordability mark, but it will also get you a pontoon boat with some high-end features that generally show up only on much more expensive boats. Look at the helm, and you’ll discover a digital display rather than those old analog dials.

Try sitting in the seat, and you’ll discover an uber-comfy high-back chair. Flip up one of the couch bases, and you’ll discover single-piece bases with drain channels around the edges of the stowage compartments. There’s also a fishing-friendly version, the Aurora LE Angler, which runs in a very similar price range. 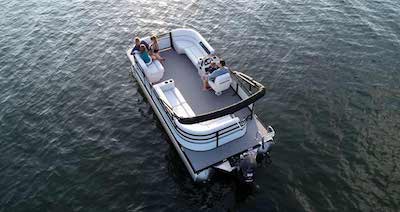 Although Misty Harbor lists pricing for the Viaggio line without power (that’s left to the dealer) at a hair over $21,000 for an 18-footer there’s plenty of cha-ching left over for an outboard up into the 50 or 60 horsepower range.

And this pontoon boat has a stand-out feature that many affordable pontoons lack: four full-sized lounger seats. Most models this size utilize an L-shaped lounge aft with a walkthrough to one side. But the Del Mar U instead has a pair of facing J-shaped loungers with a walkthrough in the middle, both in the bow and in the stern, plus helm and passenger’s chairs. 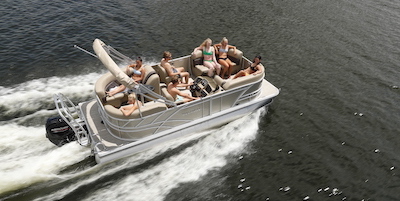 Can you find a pontoon boat that comes with the high-end details found on more expensive models, without breaking the bank? The Sylvan Mirage 8520 LZ proves it’s possible, coming in at a starting MSRP of $33,147 with a 60 HP Mercury FourStroke. 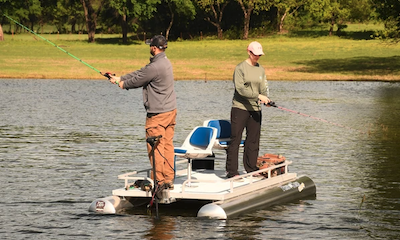 With its $3,199 MSRP, the Pond King Champ is the undisputed champion of affordability. Clamp on an electric motor or up to a 3.5-horsepower outboard, and you’ll be ready to start prowling the pond for bass and crappie. This 10-footer has room for two, a weight capacity of 650 pounds, a deck beam of 4’7”, and a six-inch kick rail.

There’s a slew of extras you can add ranging from cupholders to a duck blind, and considering how inexpensive this mini-pontoon is, you could add each and every one and never spend even half of the allotted budget. 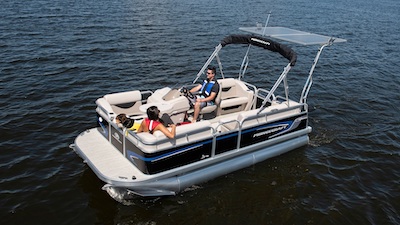 If you live on or near a lake that doesn’t allow gasoline motors or if you just want to have the lowest carbon footprint around, the Princecraft BrioE 17 belongs on your short list. Powered by a Torqeedo Cruise 2.0 2,000 watt electric outboard (comparable to a five-horse gasoline engine), speeds will be mellow and cruising range will be limited, but boating doesn’t get any greener than this.

Base price is a hair over $13,000 but add in $8,000 to get the pair of 24-volt solar panels. Beyond the power system the BrioE 17 is more or less like any other “normal” pontoon, with a pair of large couches on the port side and a smaller set plus a helm station with driver’s seat, to starboard.

Pontooners who like to hit the lake one day and then head for the bay the next will want to check out the Sun Tracker Party Barge 20 DLX, which can be had in a complete boat-motor-trailer package for a couple thousand dollars under our max. That gets you a 90 horse Mercury FourStroke, too, so this boat won’t be a slouch and you can expect to run at speeds nearing 30 MPH.

The trailer is a tandem-axel rig with brakes and a forward boarding ladder. Seating includes a couch/couch/L-lounger layout plus the helm chair, with added comfort provided by 26-ounce upholstery over multi-density foam padding. Unique Perk Alert: The Party Barge 20 DLX has a wheelchair-accessible access gate.

So there you have it: 10 affordable pontoon boats that the average American family can get without even changing the budget. Then again, if money is no object…

If your idea of “affordable” is spending about as much on your boat as the median cost of a house in the US of A, you’ll probably be interested in a precocious pontoon like the 31’4” long, 10’0” wide Premier Escalante. Starting MSRP is $146,800, but that’s before you load up to 800 total horsepower onto the transoms and start adding options and accessories.

Highlights of this double-decker pontoon palace include a 12’ high second-level deck with seating and a waterslide, a full upright rigid changing station/head compartment, and an entertainment center with a sink, refrigerator, wine chiller, and crystal caddy.