Deck boats are known for maximizing available interior space, but what many people may not think about is that they also maximize your boating bang-for-the-buck. They usually have more seating and stowage capacity than other types of boats of the same size, they can adapt to just about any boating activity ranging from watersports to fishing, and they’re every bit as easy to run and maintain as an average bowrider or center console.

Plus, there are lots of deck boats to choose from—lots and lots. We’d encourage any boater to take their time and research as many models as possible before making any decisions, but checking out these 10 most affordable deck boats is great place to start. 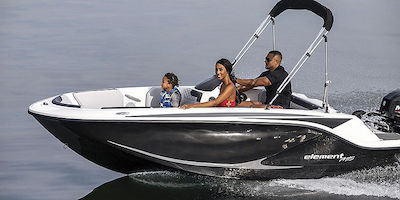 We previously called out the Bayliner M15 as one of the Top 12 New Boats Under $21K for 2021, but even so, we can’t talk about affordable deck boats without starting here. A list price of just $13,999 for a boat-motor-trailer package (with a 40 HP Mercury FourStroke) makes this one of the most affordable new boats of any type, and its deck boat design means that even at just 15’2” long and 6’7” wide it still has comfortable seating for five.

Plus, the M15 is built on Bayliner’s M-hull design. That maximizes stability, a critical factor when it comes to the comfort and security of you, your family, and your guests. On top of that, the package length is 17’5” so the M15 will fit in virtually any garage in America. 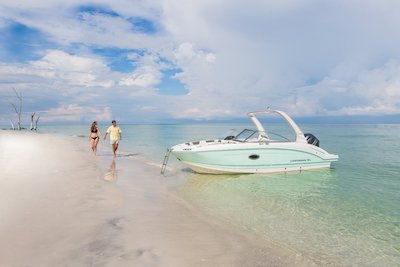 With a sticker price of $57,595 (which includes a trailer and a Yamaha F200 four-stroke outboard), the Chaparral 230 Suncoast delivers everything you could hope for from not only a deck boat, but also a watersports boat, a day cruiser, and a bowrider. That makes it like three boats in one, so for around $20K per boat, what’s not to like?

Plus, this is about as competent a deck boat as you’re likely to find, with almost 23 feet of LOA and the ability to take a dozen people aboard. Sports features include in-deck ski/wakeboard stowage and an optional arch with an elevated tow bit; cruising complements range from an enclosed head to built-in and carry-on coolers; and bowrider-like perks incorporate forward seating with integrated cupholders and stereo speakers, a folding center windshield, and a bow-mounted telescopic boarding ladder for easy visits to the beach. 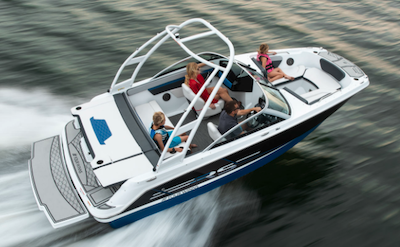 With a starting price of $36,951 the Four Winns HD1 is more affordable than many outboard-powered options but this boat comes with a standard MerCruiser 4.5L 200 HP stern drive under the hood. That brings with it advantages like a huge aft sunpad, and a full-beam swim platform that no deck boat with an outboard can match.

Yet this rig still provides as much seating and interior room as any of this size, has plenty of watersports get-up-and-go with that potent powerplant, and is still easy to trailer (and comes with a custom-matched single-axel trailer with brakes). 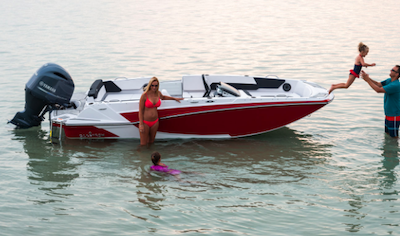 If what you’re after is maximum seating and elbow room for the LOA, you’ll find that the Glastron GTD 180 has a unique appeal. Rather than utilizing the common split windshield layout, this boat has a single console to starboard. Seating runs along the transom, the goes forward and up the port side uninterrupted until reaching the bow. And there’s even more seating up there, wrapping around in front of the helm station.

In fact, there’s more than enough seating for the entire crew even with the boat’s maximum capacity of 10 aboard. Yet pricing for the GTD 180 is eminently reasonable, starting at $28,506 with the standard Mercury 90 HP FourStroke and a single-axel trailer with submersible LED lights and a swing-away tongue. 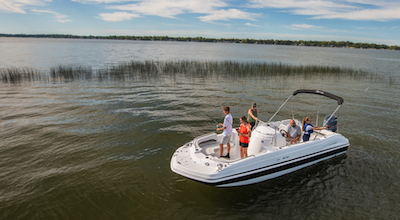 Hurricane is known for building multiple model lines of deck boats, but the Center Console 21 OB stands out as one of the few deck boats on the water that’s designed for serious anglers. With a 115-horsepower outboard on the transom you can get it for less than $50K, or up the ante to just over $50K and get a 150 HP powerplant. Either way this boat will likely cost less than the tow vehicle that pulls it to the boat ramp.

And once you get there, you’ll enjoy some serious angling action thanks to the center console design’s 360-degree fishability. Other fishy perks include twin (30- and 12-gallon) livewells, an aft deck with seating that converts into an elevated casting platform, gunwale and under-gunwale rodholders, and fishboxes in the deck. 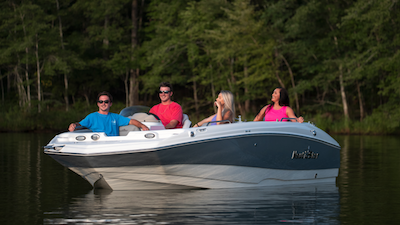 In many cases you may have to sacrifice some performance to attain affordability, but that is most certainly not the case with the NauticStar 193SC. Its $42,907 MSRP includes a 115 HP powerplant that takes this boat up over the 40 MPH mark at top-end, and provides a cruise of around 30 MPH.

Also unusual for deck boats in this size range, the 193SC has a mini-galley with a freshwater sink and stowage, to go along with the onboard 25-quart cooler. The boat can be semi-customized for the way you want to use it, too, with options for a livewell for anglers, a ski pylon and transom shower for watersports fans, and a table or bow filler for folks who just plan to kick back and relax. 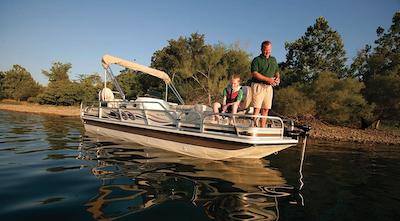 A unique offering among the deck boat crowd is the PlayCraft FX4 Fishdeck 20, which has the hull of a fiberglass deck boat but a topsides very much like a pontoon boat. The aluminum fence with baked-enamel painted panels, rotomolded furniture bases, and woven vinyl flooring might even make you think there are pontoons under this hull—right up until you hit the throttle.

Then, you’ll discover the solid, seaworthy feel of the fiberglass monohull underfoot. And while PlayCraft doesn’t publish MSRP numbers, if you look at advertised listings for this model you’ll see plenty on offer that cost less than most new cars. 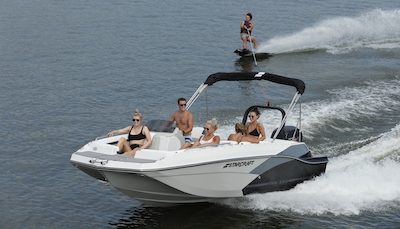 You can park a new Starcraft SVX 191 OB with a Mercury 115 HP FourStroke on the transom in your garage for $36,819—which means your eminently affordable monthly boat payment will most likely be well below the payment you make on your boring land vehicle.

Beyond affordability, what we really like about this model is that it enjoys a wide-open floorplan with seating ringing the interior, and stowage area is molded into the port side, providing backrests that effectively turn the seats on either side into loungers. We also love that Starcraft puts EVA Soft Touch matts on both bow and stern swim platforms. 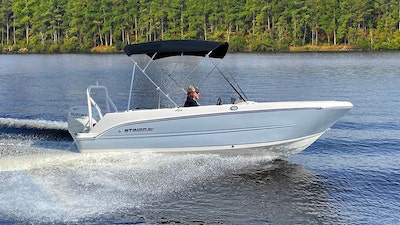 Starting at an MSRP of just $24,345 with a Suzuki DF70 four-stroke outboard, the Stingray 172SC Deck Boat is one of the most affordable boats in the mix. But don’t let the small price tag nor the boat’s relatively small size fool you into thinking it isn’t well-equipped. 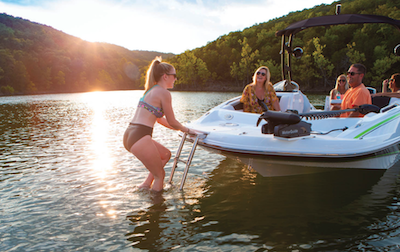 Here’s what we love about the Tahoe 1950, other than its $37,090 “No Haggle No Hassle” national price tag: it’s not just a deck boat, it’s a complete deck boat package. Hitch up the trailer, fill up the fuel tank so you can feed the Mercury 115 HP outboard its oats, and hit the lake. The boat’s standard items list includes multi-tasking accessories ranging from livewells for fishing to tow pylons for watersports, and you don’t have to pay extra for many of the upgrades other manufacturer charge extra for.

The hardware is all stainless-steel for saltwater use, the stock outboard is a Pro XS Command Thrust model, and while Tahoe could certainly get away with including a single-axel trailer they instead package this deal with tandem axel trailer with Galvashield corrosion protection, a spare tire, a fold-away tongue, submersible LED lights, safety cables, and brakes on both axels.

You say you don’t need a trailer? Fine, that brings the No Haggle No Hassle deal down to $33,695. But if you ask us, the ability to explore unrestricted horizons on a complete and affordable package like this is just too good to resist. 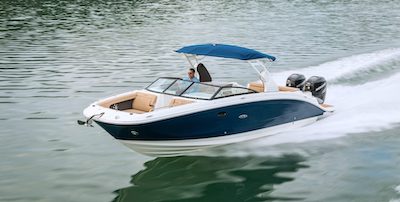 We’re not about to argue that a $157,138 MSRP would be considered “most affordable” by the average boater, but if your standard of living rates it and you want a very big, very plush, very modern deck boat, the Sea Ray SDX 290 will be of interest.

One could easily argue it’s the queen of the deck boat fleet, with Luxurious aft-facing lounges on the stern, bow seats that count as loungers, and top speeds in the 50 MPH range with a pair of 250 HP Mercury Verados on the transom. As one might guess you can get this boat outfitted with uber-cool features, too, like an electric grill in the cockpit, a refrigerator, and even an onboard air compressor for blowing up the kid’s tow-toys.