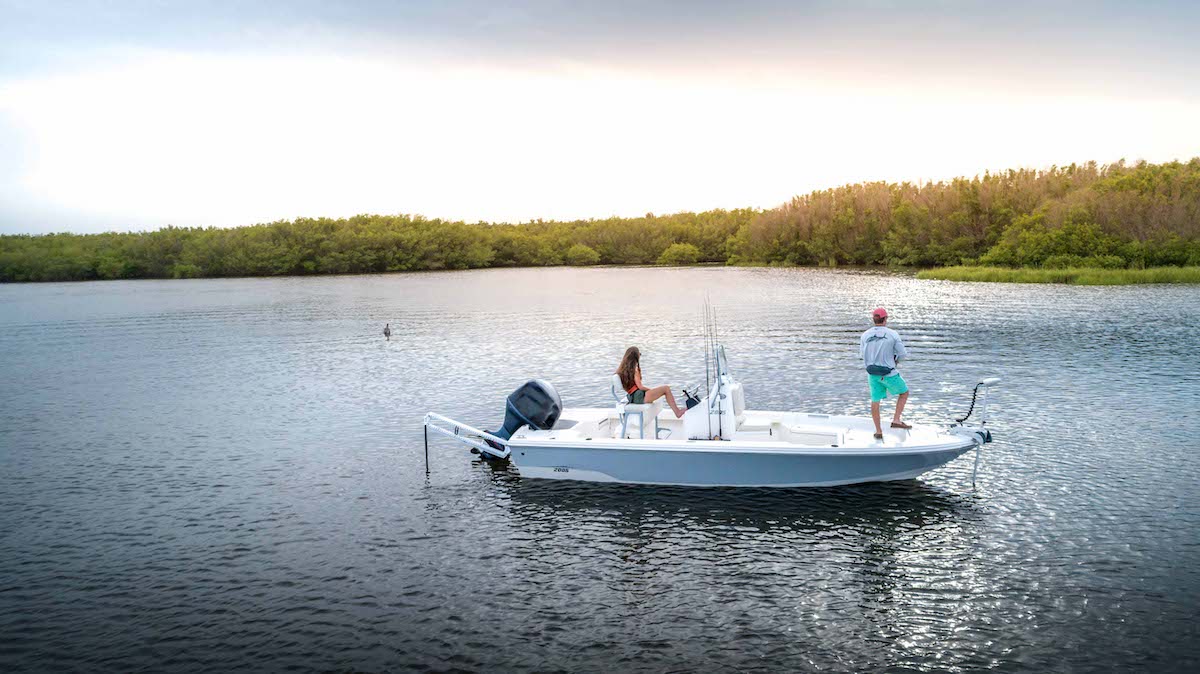 Center consoles are great platforms for all kinds of fishing, but the specialized versions called bay boats (or flats boats) are the hands-down best for shallow water, light tackle action—and if that’s the type of angling you enjoy most, you’ll be interested in these 10 most affordable bay boats. Not one of them breaks the $50,000 ceiling and some cost half that amount, yet each and every one of these models will prove perfect for chasing those tailing redfish, casting in the mangroves, tossing topwater to stripers, and probing the bay for black drum.

Which will be ideal for your fishing grounds? That’s debatable. But if a bay boat lays in your future, be sure to check out these 10 affordable models. 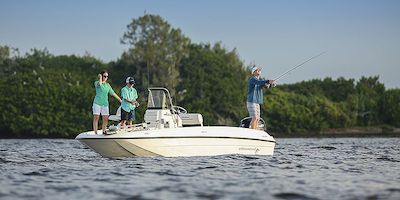 The Bayliner T18Bay has Bayliner’s “M-hull,” which rides atop an uber-stable M-shaped design. And it carries an uber-low price tag, with a $22,573 starting point that shakes out to a monthly payment barely north of $200. Affordable? You bet it is. What’s more, the base package includes a 90 HP Mercury FourStroke outboard and a single-axel galvanized trailer with a garage-storage length of 22’6” overall.

Serious anglers may want to spend another $1,000 or so to get some optional fishing features like the bow fishing seat, Lowrance Hook2 4X fishfinder, forward livewell, and trolling motor bracket, but stock goodies include a livewell in the aft casting deck, under-gunwale rodracks, aft jump seats, a swing-back cooler helm seat, and six vertical rodholders in the console. 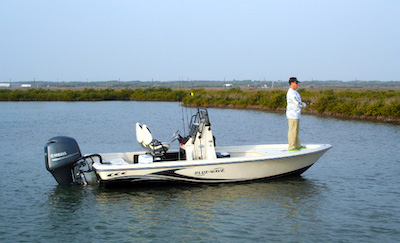 Blue Wave is one of the original bay boat builders and has experience crafting shallow water fishing machines that dates back for decades. The 2000 Pure Bay is their smallest offering, and its $45,687 starting price (with a Suzuki DF140A) puts you into a finely honed shoal water fishing boat that’s rigged with high-end perks like digital gauges, tilt-steering, and a leaning post with super-comfy Llebroc seats. You’ll also find that fittings and hardware ranging from rodholders to the gas fill cap are stainless-steel, rather than the plastic pieces and parts found on some affordable bay boats.

One of the biggest enhancements, however, is the stock 10” jack plate which locates the motor aft of the transom and eliminates the splashwell. That means the aft casting deck has a lot more useable space than most boats of its size. The 2000 Pure Bay also has a pocket designed into the hull for running in super-skinny water and drafts (see What is Boat Draft?) a mere eight inches. 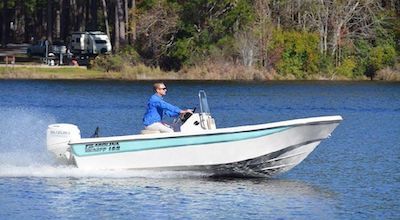 While one could technically argue that the Carolina Skiff 162 JLS is a skiff, it surely qualifies as a bay boat, too, thanks to fore and aft casting decks and a six-inch draft. And with a starting price of $18,972 there’s no argument about this boat’s affordability. Fishing features on the stock model include six console rodholders, an 18-gallon livewell, trolling motor pre-rigging, inwale rodracks, and pedestal-mount fishing seats.

Note that unlike older Carolina Skiff J-series boats this is a fully-linered model, which looks a lot sharper than the historic spackle-finish interior seen on un-linered boats. 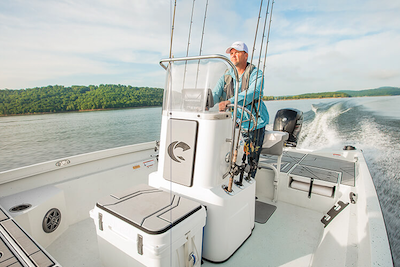 The Crestliner 1800 Bay is an aluminum bay boat option which starts at $25,973 with a 115 HP Mercury FourStroke outboard and a galvanized trailer. One of the big advantages of owning an aluminum rig is its lighter weight, and with a displacement of just 1,216 pounds, the 1800 Bay will be easy to haul even with a midsized SUV or pickup.

It’s also well-outfitted for action, with a 21-gallon livewell, six vertical rodholders on the console plus inwale racks, a 48-quart cooler in the console seat, flip-up jump seats in the aft casting deck, and a leaning post with a fold-down footrest.

If you want a bay boat that can do double-duty as a flats boat, the Mako 18 LTS will be a top contender. It has 13 degrees of deadrise at the transom and a 1,752-pound displacement so it’s certainly able to take on some seas, yet it also has a bow that’s almost entirely decked to maximize casting space. A pocket in the transom allows for hopping up onto plane in extremely skinny (shallow) water.

Base model fishing features include six console rodholders, an 18-gallon console livewell, and a 72-quart flip-back cooler helm seat. Packaged at just under $30,000 including prep and freight with a 90-horse outboard or just over $30,000 with a 115 HP powerplant (which gets you top-end speeds in the 40 MPH range), the package also comes with a single-axel trailer with Sure Lube hubs and a swing-away tongue. 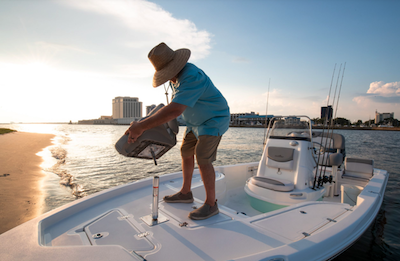 With a sticker price of $46,227, the NauticStar 215 XTS SB is unique among its peers. The “SB” in the model name denotes that this boat has a tunnel in the hull for shallow-running abilities. Plus, with a standard 150 HP outboard on the transom it has plenty of power. The forward casting deck is unusually extensive with side wings stretching back to the front of the console, and from a fishability standpoint this boat is top-notch.

In fact, the list of standard fishing features is off-the-charts comprehensive: rodboxes for stowing up to 10 rods in organizers, an insulated bow fishbox, livewells both forward and aft, cast net/bucket stowage under one aft jump seat and tackle stowage under the other, two flush-mount gunwale rodholders, under-gunwale rodracks, six vertical console rodholders, and a leaning post with 94-quart Igloo cooler. 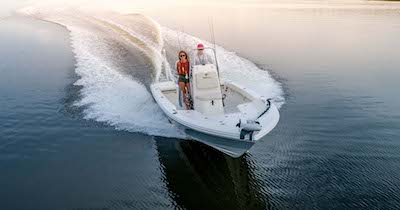 It may not be very big, but the Pathfinder 2005 TRS packs quite a punch considering its $48,193 starting cost (with a Yamaha F115). This is Pathfinder’s smallest offering, but it’s built just as well as their larger boats and its attitude definitely out-does its LOA.

Even though it’s under 21 feet long, the boat has over 120 quarts of onboard cooler space, can carry up to seven passengers, and includes standard features more commonly only on larger boats like hydraulic steering, separate battery switches for the starting and trolling motor batteries, a compass, a toe-kick at the base of the console, and an aluminum leaning post with five rocket launchers and a cooler underneath. 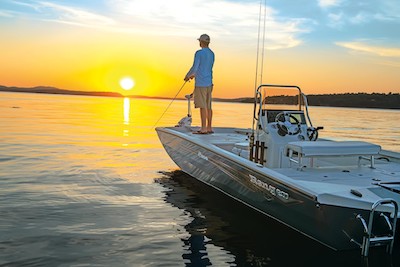 Another affordable aluminum bay boat option is the Ranger RB200, which lists at $37,545 with a 150 HP Mercury FourStroke outboard. Constructed from 5052 H34 marine-grade aluminum, it tips the scales at 1,660 pounds and has all-welded construction. Unlike most of the boats in this category, it comes with the bow-mount electric trolling motor factory installed and a Minn Kota Riptide Maxxum 70-pound thrust model is included in the package. The tandem-axel trailer is another high point; most boats of this weight are sold with single-axel trailers, and this one also includes a swing-away tongue and hydraulic surge brakes.

What about the fishing highlights? The Ranger brings with it a Lowrance Hook2 4X fishfinder, livewells in both the forward and aft decks, a pedestal fishing seat with multiple bases throughout the boat, an aluminum leaning post, and six vertical rodholders on the console. 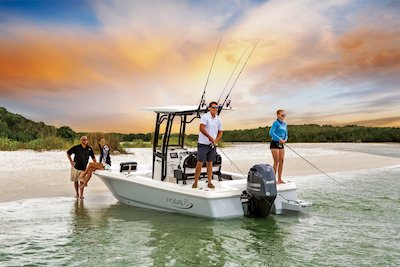 Robalo does make a smaller bay boat that costs less, but the 226 Cayman is the largest of all these competitors to ducks under our price bar (by a little less than $1,000), with a whopping 22’6” length and an 8’6” beam. This is also the most powerful standard-issue model in this round-up, with a Yamaha F200 four-stroke outboard on the transom. And at 3,400 pounds it’s the heaviest contender, too. Add that heft in with the 15-degree transom deadrise and it won’t be surprising to learn that it’s also one of the best for running through big waters. Yes, draft is a bit deeper than the others at one foot even, but the real ace up this boat’s sleeve is its family-friendly nature. The bow can transition between seating (with removable backrests) and casting space, and the console houses a fully enclosed head compartment.

As far as the fishy features go, the boat has twin livewells (30 gallons aft and 20 gallons forward), six rodholders in the console plus two in the gunwales, multiple insulated fishboxes, and trolling motor pre-wiring installed. 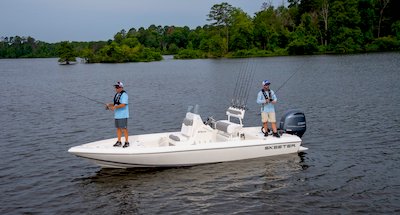 The Skeeter SX210 has a NAP price just under $40,000 for the boat with a Yamaha F150 outboard and an aluminum tandem axel trailer, and it comes with an added measure of confidence: a limited lifetime structural warranty, a 10-year transferrable structural warranty, and a three-year limited component warranty. That means less worry for you, while you enjoy high-end features like standard hydraulic steering, Yamaha 6Y5 multifunction gauges, and top-end speeds pushing into the upper-40-MPH range.

The SX210 also has some unmatched fishing features, like a whopping 14 vertical rodholders and the option to have a Humminbird Helix 12 CHIRP MEGA SI with side-imaging pre-wiring installed. 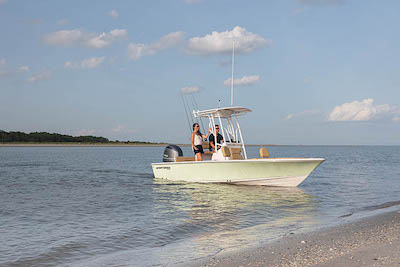 Eleven? Wait a sec, weren’t we supposed to be talking about the 10 most affordable bay boats? Well sure, but we can’t stop there because they say the devil’s in the details, and the $35,610 Sportsman Masters 207 proves that the devil can be beat—without breaking the bank.

Take an up-close look at this model and you’ll discover high-end touches that aren’t commonly seen aboard “affordable” boats, like hatches that are fully finished on both sides, raise on gas-assist struts, have gaskets, and have locking latches that dog down tightly. You’ll discover recessed hinges, USB and 12-V plugs at the helm, flip-up helm bolsters and a flip-up transom bench seat upholstered in Sileather Marine silicon-coated fabrics, and livewells finished with a baby-blue interior that calms the fish you drop inside.

There’s no doubt that this builder sweats the details, while also delivering a hefty standard feature list including big-ticket items like a Garmin GPSMAP 942xs MFD, a 20-gallon aft livewell and a 10-gallon forward livewell, and a pair of flush gunwale holders in addition to the six vertical rodholders on the console.

Okay, we promise to stop adding boats to this Top 10 list—but not before we spend a moment talking about the Wellcraft 221 Bay. This boat lists at a hair over $46,000 (including a 150 HP powerplant and a trailer) and with 15-degrees of deadrise, has one of the sharper V-hulls in this bay boat mix. What really catches the eye, though, is this boat’s looks because the styling is unlike any other you’ll see.

This boat also has the largest bait-hauling capacity of any in this mix, with a pair of whopping-big integrated 34 gallon livewells.

Yes, we went over the budget for our top 10 list by 20-percent. But the good news is that with each and every one of these options, you won’t have to go over your budget to tow one home. That proves without a doubt that these 10 most affordable bay boats (okay, these 12) put shallow water, light tackle fishing action within easy reach.