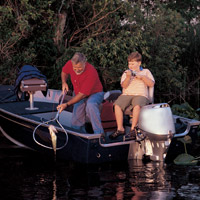 Have you ever heard of the Marine Life Protection Act? No.
Well, you’re not alone—70% of Californians don’t know what it is.

The MLPA is legislation passed in 1999 to “sustain, conserve and protect” California’s marine resources. Unfortunately, as Californians work to manage the state’s coastal waters via the MLPA, it’s been used to effectively shut down recreational fishing and boating access.
In addition to unnecessarily closing state coastal waters to recreational fishing, MLPA gives little consideration to the economics of saltwater sportfishing and the communities that depend on it. At $1.9 billion, recreational fishing retail sales are close to the value of the state’s grape harvest. It’s tax revenues add $161 million to local and state coffers. Saltwater sportfishing supports more than 19,900 jobs in the state, generates more than $2.3 billion in economic impact and pays about $736 million in salaries and wages for the more than 761,000 saltwater recreational anglers in the state.
Saltwater recreational fishermen are stewards of the environment and advocates for sustainable fishing and conservation. They, boaters, and the public all share concerns for the conservation and protection of fish species and the ocean for today and future generations.
That’s why recreational fishermen and boaters are stepping up to help educate and answer myths about their sport and are working with state and environmental officials to protect the health of California’s ocean environment.
Recreational fishermen and boaters support scientifically-based management of California’s ocean resources. That’s why they are actively participating in a process overseen by a Blue Ribbon Task Force as part of the MLPA to examine all options available to prevent the harm of our oceans. After all, whether addressing land use, education or transportation planning, government works best when citizens are directly involved.
If you’re interested in finding out more about this joint effort to help California’s manage its coastal waters and preserve coastal recreational fishing for generations to come, visit http://www.keepamericafishing.org/california.html.
Gordon C. Robertson is the vice president of the American Sportfishing Association.  He can be reached at grobertson@asafishing.org.
Content courtesy of Southern California Marine Association.