Live Bait: How To Keep Fishing Bait Alive and Healthy 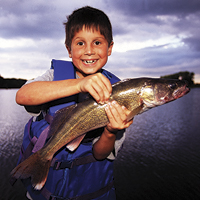 Nothing catches fish like live bait," says professional guide Jim Duckworth of Lebanon, Tennessee. He is putting the finishing touches on a portable baitwell for his pontoon boat. "The trick is to keep it healthy."

It’s true. The natural scent, realistic appearance and lifelike action of live bait can be irresistible to gamefish jaded by trendy artificial lures constantly retrieved by the masses of recreational anglers. But it takes a balance of water temperature and oxygen working together to keep bait feisty and alert to trigger wary fish to predatory action.

That’s particularly difficult in the summer, because water holds less oxygen as ambient temperature increases. At the same time, the metabolism of fish increases, raising their oxygen consumption.

"It’s give and take when using live bait," notes Duckworth, who is also a live-bait fanatic and a constant do-it-yourselfer when it comes to fishing equipment. "The solution to keeping bait healthy during hot weather is to circulate oxygen and keep baitwell water cooler than the lake."

Duckworth suggests freezing water inside a two-liter soft-drink bottle and placing it in the baitwell. Adding crushed ice to the tank is an option. The object is to keep water no more than 5 degrees Fahrenheit lower than the ambient temperature of the lake. Cooler water increases oxygen saturation while decreasing metabolism and stress on the bait.

Duckworth uses a popular minnow-holding formula that removes chlorine from ice, stimulates the natural slime coat of the fish, reduces fungus and bacteria, and improves the quality of the water in the baitwell.

To keep the oxygen level high, live bait experts universally agree that a diffusion stone is more effective than a spray-nozzle device powered by a bilge pump — the most-common setup in fishing boats.

"The stone produces thousands of bubbles, saturating the water with oxygen while the sprayer only recirculates the water inside the baitwell," observes Duckworth.

Duckworth’s homebrew solution for keeping the balance in oxygen content and water temperature is economical and portable, and it doubles as an ice chest.

Shared with Permission from Boating Life.

Read more about keeping your fishing bait alive in this article about livewells and baitwells.