Fishing Tips from the Pros 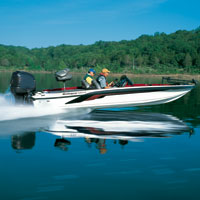 The tension backstage was intense during the weigh-in at the 2006 Bassmaster Classic, and it wasn’t because of the number of fish in each contestant’s bag. The nerves had more to do with fear that another bag might be opened: the one holding a personal fail-proof tactic.

“You try to keep stuff as secret as possible,” says Dean Rojas, who finished 12th at last year’s Classic. “Maybe it’s a color that worked in a certain situation or a certain way to cast your lure, anything to give you an edge over the next guy. That’s why you never see the older guys talking.”
Or as Pat McIntire, CEO of fishing tackle manufacturer Pure Fishing, told us, “We talk to anglers so we can create new products, but they won’t give full disclosure in front of each other. Alone, one on one, that’s when the really good stuff comes out.”
So rather than bring groups of anglers to your home, we did the next best thing. We took them aside, one by one, and got their best tips. Try them out the next time you hit the water, and when you start pulling fish in your boat, please do us a favor: Keep the secret to yourself.

1. Glue your bait
When I’m flipping in real heavy grass, I like to dab a little crazy glue on the hook and slide my worm up on it. It anchors the worm in place so you won’t lose it. I’ve won tournaments with that technique.
Steve Kennedy, 2005 Wal-Mart FLW Tour winner, Kentucky Lake
2. Downgrade for bigger fish
If the fish suddenly stop biting, but you know they’re around, downgrade your bait and change your retrieval speed. Go from a seven-inch worm to a four-inch worm, and slow down your presentation. A lot of times you have to slow it down for the bigger fish.
Eric Naig, Crestliner Boats team angler
3. Drag your line to the honey hole
For spinning tackle, spool your line off the reel and drag it about 50 yards behind your boat on the way to your spot. Then reel it all in. You won’t have any kinks or twists the rest of the day.
Larry Nixon, two-time BASS Angler of the Year
4. Pack a Sharpie
I carry 25 different color Sharpie pens to customize my crank baits. If you put a little red line where the gills would be it mimics bleeding. To mimic a perch, I’ll paint the fins orange. To mimic a shad I’ll paint a black dot behind the eye toward the tail.
Brent Ehrler, 2006 Wal-Mart FLW Tour Championship winner
5. Tune your crank baits
Cast your lure and reel it back in. Watch it all the way to the boat. It should come back straight. If it runs to the right, tweak the eyelet to the left with some needle nose pliers or vice versa if it runs to the left. An untuned lure won’t present properly and won’t catch fish.
Walt Ermanson, owner of Trophy Charters on Lake Erie
6. When all else fails, use a grub
I’ve used plastic grubs to catch everything from bass to perch to saltwater species when nothing else worked. It’s a subtle lure, so fish don’t have to swim as fast to catch it.
Jay Kumar, CEO of Bassfan.com
7. Handle fish with care
I try to not be rough handling the fish. Hold it at the bottom of the lip, and don’t remove its slime. Fish can get diseases if they don’t have the slime, which protects them.
Violette Sesco, BASS’ oldest active angler (80) and a competitor on the Women’s Bassmaster Tour
8. Mimic animals
Different animals hatch in the lake, depending on the time of the month, and that’s usually what the fish are keying on. Try different stuff — lures that mimic shad or frogs or grubs, that sort of thing. One will be sure to catch fish.
Mark Sexton, bait analyst at Berkley Fishing
9. Let your bait hit bottom
After you cast, watch your line fall limp before reeling it in. It means your bait’s on the bottom, in the strike zone. Then, when you’re slowly reeling it back in, lightly shake the rod with your other hand. It mimics a live worm better.
Gerald Swindel, 2004 BASS Angler of the Year
10. Find the food, find the fish
I look out for great blue herons because they’re hunting for the same food my fish are hunting for. When I find the herons, I know there must be fish nearby.
Ken Penrod, Hall of Fame fishing guide