California grabs top spot from Michigan with most boat registrations 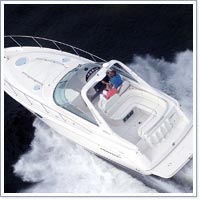 There were 13.0 million recreational boats registered in the United States in 2002 according to the U.S. Coast Guard. This represents an increase of 154,000, or 1.2 percent from the previous year.

“The number of boats owned in the U.S. exceeds the 13 million reported by the USCG, since many small, non-powered crafts such as canoes and utility boats are not required to be registered by many states, or are simply not registered by owners,” says National Marine Manufacturers Association (NMMA) Market Statistics director Jim Petru.

After years on top, Michigan concedes its title as the number one boating state in the country to California, whose residents registered 1,051,606 recreational boats in 2002. Michigan is the second largest state, with a little more than 1,000,000 boats registered. Mississippi rounds out the top 20, falling from 16 th place, with 100,000 fewer boats registered in 2002.

Other changes in the top 20 rankings:

Here’s a quick look at the top 20 states and the total number of boats registered in each:

Data compiled by Statistical Surveys, Inc. on new powerboat registrations for 44 of the 50 states (representing approximately 96 percent of the marketplace) indicates there were 233,000 new (model year 2002) power boats registered by the states during the year.

The state with the greatest increase in registered boats was Wisconsin, which jumped 12.9 percent compared to 2001, meanwhile, Mississippi witnessed the largest decline in registrations, dropping 33.9 percent. A representative from Mississippi\’s Department of Wildlife, Fisheries, and Parks suggests registrations may have been compiled incorrectly in the past, and that the 2002 data is correct.

Regional rankings remained consistent with the 2001 report, with the Eastern North Central region ( Illinois, Indiana, Michigan, Ohio, Wisconsin) holding on to the number one spot with 2.7 million boats, accounting for one out of every five boats registered in the country. The South Atlantic region (Delaware, District of Columbia, Florida, Georgia, Maryland, North and South Carolina, Virginia and West Virginia) follows closely with 2.5 million registered boats.

Three regions experienced significant increases in registrations during 2002 while one showed a decline in the number of boats registered.

Boat registration statistics are compiled by individual states. The federal government uses these stats to allocate Aquatic Resource Trust Fund dollars among the states each year. NMMA uses the boat registration data to develop its estimates on annual state dollar sales of new boats, motors, trailers and marine accessories. This information will be available in April.