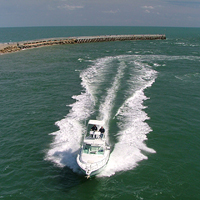 Understanding the Basics of Boat Radar

Boat radar is different than other types of navigational aids used by boaters. In the first place, it is more costly, and uses more power. In the second place, you will need to have set it up and adjusted for the conditions in which you boat by a person skilled in radar. Finally, reading radar also requires skill; you or someone in your crew will need to learn how to interpret the images on the radar screen.

Boat radar typically uses seven controls. The first is the on/standby/transmit, which powers up the unit. You’ll need to give the unit time to warm up before you can use it.

Brilliance control determines the brightness of the picture on the screen. The image should be clearly visible and not overly shiny. LCD marine radar units can be adjusted, depending on the angle of the screen.

Gain is the amount of amplification that is applied to the echo as it returns. It is similar to the brilliance setting, but when you adjust the gain, you are making an adjustment that will determine whether or not targets will appear on the screen.

Range refers to the control used to adjust the range at which the set will operate, usually measured in increments of 1/8 to 1/4 mile. Shorter ranges are more useful in piloting the boat, while medium ranges can help you avoid collisions.

Tuning adjusts the marine receiver for optimal signal reception. The echoes that return to marine radar are weak, which is why the transmitter and receiver need to match.
Control of sea clutter is also known as swept gain, and helps in removing the clutter that is can be caused by the echoes of waves. When your sea clutter is set to low, it can reduce the amplification of the wave returns, leaving the echo returns’ amplification intact.

Rain differentiation or clutter will remove the clutter that is caused by rain, snow or hail. Heavy rain tends to reflect pulses back, but these echoes are different than those sent back when radar waves encounters solid objects.

It takes practice to properly read marine radar. In fact, when you first look at the screen of a marine radar unit, you may think that it looks crude and unrefined, since we’re all accustomed to the look of HD TV’s.

The magnetron has been the unit of choice in radar instruments for a long time. Today, there is another choice: Broadband boat radar. Recently introduced, it is magnetron-free, and has many practical applications.

Broadband marine radar uses only 1/2000 the amount of peak power used by traditional scanners, and in general, outperforms standard radar, too. While 0.1-W radar is probably not familiar to you, it is to military members and pilots. This low-wattage, high-end radar is already in use on more expensive private planes, and has had a place in the military for quite some time. These units use a semiconductor to produce a microwave signal, which tends to be much more precise than the magnetron radar units.

The typical broadband marine radar scanner has two antennas, and is actually a fusion of new component types and smart engineering. It’s taken some time to determine the distance in which this type of radar operates most efficiently. From 10–24 miles, broadband marine radar isn’t spectacular. However, within a ten-mile range, its performance is unbeatable.

Solid state broadband scanners for marine use have no warm-up period, and thus can be used as soon as they are powered on. The newer units also tend to be more stable, which means less time spent tuning and tweaking the units. The future looks bright for broadband marine radar and boaters alike.

About the Author: Jane Warren enjoys boating and spending time on the water swimming, scuba diving, boating, tubing, and just about anything else related to outdoor water sports. She manages a website called Towable Tubes Direct.