Where Do Fish Live? 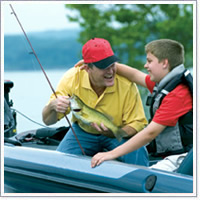 To catch fish the angler must first locate them. Fish are found nearly everywhere there is water with enough food, oxygen and cover. Near your home there should be a body of water that has fish living in it. But to catch a fish, first you must learn to understand where they are hiding.

Not all fish can live in the same kind of waters. Fish can tolerate different environmental conditions, including different:

One major factor that separates fish is salt. Some fish cannot live in areas where there is much salt and others need salt in the water to live. However, some fish can live in both saltwater and freshwater!

Brackish Water
An estuary is where fresh water streams and rivers meet the salt water from the ocean. The amount of salt (salinity) changes daily with the flow of tides, rain, or drought. This water is termed "brackish." Changes in the amount of salinity will determine which fish can live in the area. Species found in these waters include redfish, sea trout, snook and striped bass.

Some fish live in saltwater, but swim up streams and rivers to spawn (lay their eggs). These fish are called anadromous fish. They include shad, salmon, and some types of trout.

Oxygen
Without an adequate supply of oxygen in the water, fish cannot survive. Fish such as carp can live on less oxygen than fish like trout. What can affect the amount of oxygen in the Water? Living plants within a lake or stream add oxygen to the water through photosynthesis - the process of using sunlight to make food. Oxygen can also enter water from the surrounding air. In a stream, moving water tumbling over rocks picks up oxygen from the air.

Decaying plants use oxygen from the water to decompose. Pollution of many kinds reduces oxygen in water. Chemicals dumped into water trap oxygen and take it out of the natural system. Thermal pollution, the heating of water through industrial use, reduces the amount of oxygen water can hold.

Water temperature affects the amount of oxygen that water can hold. Colder water can hold more oxygen molecules than warm water. Oxygen levels can change from one location to another in the same body of water.

Food
The amount and type of food available plays an important role in which fish will be present in a body of water. The amount of competition with other fish is also a factor.

Each fish has a different range of water temperature in which it can survive. Some fish can live in a wide range of temperatures, but trout require cold water. Although fish cannot always find the exact temperature they prefer, they are usually found in water close to that temperature.
Fish must have water with adequate oxygen in which to live. Good-quality water will support more species of fish and greater populations of fish than polluted water. Water that is stagnant, polluted, or lacking adequate oxygen will not support large numbers of fish.

Water Quality
Water quality affects fish species differently. Some fish can live in poorer water conditions than others. For example, carp can live in water that trout could not tolerate.

Cover
Cover such as aquatic plants, rocks, logs, or any other type of cover is a requirement for many fish. Fish choose certain types of cover for two main reasons. First, it provides them with protection from enemies. Second, it puts them in the best possible position from which to catch an unsuspecting meal that is drifting or swimming by.