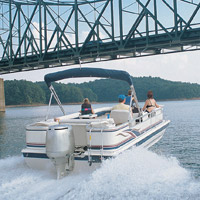 It may have been post-Sept. 11 stay-at-home syndrome or it may have been the industry’s promotional campaigns, but for some reason a lot more people went boating last year than in 2001.

That represents an 11.4-percent increase over the 2001 figure of 23.9 million. Not only is that a steep increase, but it breaks a five-year cycle of declines in powerboating participation from its 1996 peak.

The NSGA survey counts people 7 or older who participated in a particular activity more than once during the year.

NSGA spokesman Larry Weindruch said he could not explain the steep increase in powerboating, but speculated it might have been a result of the time-with-family trend that emerged after the 2001 terrorist attacks.

Jim Petru, statistics manager for the National Marine Manufacturers Association, welcomed the numbers but he, too, was at a loss to explain them. "It comes at a time when everything else has been down," he said, pointing out that boat sales have been in a two-year slump.

Among other water sports tracked by NSGA, fishing participation declined slightly, although it remained in the top five among all sports, with 44.2 million participants. That figure represents a 0.5-percent decrease from 2001.