The Mayflower—The ship that launched a nation 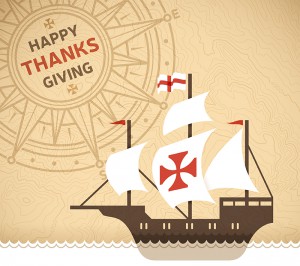 Of all our national holidays, Thanksgiving has the closest ties to boating. After all, without the Mayflower, the Pilgrims would never have made it to Plymouth Rock. And we’d have no reason to stuff ourselves silly the fourth Thursday in November. How much do you know about the vessel that helped launch our nation?

The Mayflower set sail from Plymouth, England on September 6, 1620. It landed in Cape Cod on November 9, 1620 and sailed up the coast to Plymouth a few weeks later. The 2,750 mile voyage lasted 66 days, which works out to an average of just 2 mph.

After spending the winter in the New World, the Mayflower departed for England on April 5, 1621 and arrived on May 6, 1621.

The crew could have used GPS

The Mayflower was originally bound for Northern Virginia, which at the time extended north into the Hudson River in what is now the state of New York. However, thanks to bad weather, the Mayflower landed 100 miles off course.

It’s 5 o’clock, somewhere
Despite the Pilgrim’s reputation as a dour lot, the only beverages the voyagers drank while on board the Mayflower were beer and wine. In fact, beer was actually considered to be safer to drink than water.

Life aboard the Mayflower

The trans-Atlantic trip was anything but a pleasure cruise. Because the Mayflower was built to carry cargo not people, living conditions were less than ideal. With 102 passengers and 25–30 crew, the ship was quite crowded. As the ship’s “cargo’” the passengers had to live in the cold, windowless cargo decks below the crew’s quarters.

The Pilgrims had to spend the first winter aboard the Mayflower. Only 53 survived. Nevertheless, today their descendents number in the millions. Famous Americans who can trace their lineage back to a passenger on the Mayflower include Marilyn Monroe, Bing Crosby, former Presidents John Adams, John Quincy Adams, George H.W. Bush, George W. Bush and James Garfield, Julia Child, Clint Eastwood, astronaut Alan Shepherd, artist Georgia O’Keefe and the Baldwin brothers—Alec, Stephen, Billy, and Danny.

To learn more about the Mayflower watch the video created by the History Channel below.