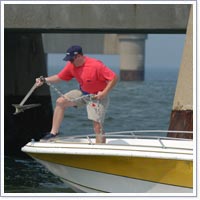 An often overlooked and unappreciated team member on your boat can be the very reason you may survive a mishap at sea. The term "at sea"is somewhat misleading, because it can be used to describe your vessel in a small lake or a Great Lake, a tributary, a river, a bay or the ocean.

Our team member, who works in concert with such other high profile friends, such as your VHF radio, your visual distress signals (VDS) and even your personal flotation device (PDF). Yes, we’re talking about safety items that are either mandated by federal law (and sometimes state law) or strongly suggested by the Coast Guard Auxiliary as items that make the great sport of Recreational Boating Safety, safe!

Why are your anchor line and rode so important? Well, as we nautical types know, ropes are called lines on your vessel. The rode is the line that’s connected to your anchor, and your anchor, well, it’s your anchor. But that didn’t answer the question, did it?

Your anchor has many uses. From the obvious, keeping your vessel secured to the ground, so it doesn’t float away, to the not so obvious of keeping your vessel from straying into danger. And let’s not forget its ability to work as a kedge, a tool I’ve unfortunately had to use too many times, living on Long Island, New York, and boating in the Great South Bay (known for not having much water depth). Yes, we’re talking about grounding here….

For those not familiar with the term kedging, Chapman’s Piloting, 56th Edition

"The term KEDGE is also applied to an anchor of any type that is used for getting a boat off when she has run aground. The kedge is carried out by a dinghy or other means and set so that a pull on the line will help get the boat off, or at least keep her from being driven harder aground; this process is called KEDGING."

Notice that you need to "pull on the line" in order to actually perform the process of kedging. You’ll also note that when you set an anchor, you slowly lower it over the side (not throw it) from the bow(preferably). When you retrieve or weigh anchor, you pull up the anchor by the line, again stressing the fibers.

Now, I’ll really answer the question I asked four paragraphs ago,why are your line and rode so important? Because line that is not kept kink free, clean, and without knots, will increase the likelihood of the line failing.

What good does it do you, especially when you’re in a situation that can go from bad to worse, for your line to snap? Not only does an anchor sitting on the bottom, not attached to anything sitting on the surface, do you no good, but you’ve probably suffered a financial loss because of the lost anchor.

So, how do you keep your line and rode in optimum condition? There are several methods you can use. One of the easiest is to eliminate chafe. Chafe is when the line rubs against another surface and begins to fray. A frayed line is a weakened line. Use rubber tubing or some other type of material to surround the line at chafe points (usually at chocks and blocks).

Do not knot your line unnecessarily. Knots, as well as splices (the art of combining two pieces of line into a single unit) decrease the overall strength of the line. If a regular 25 foot ½ inch line has a strength of 100, one simple square knot will reduce that strength by55%, a bowline by 40% and an eye splice on thimble (used to attach the line to the anchor itself) by only 10%.

Think about it; a single square knot will make the line have 45% of its normal strength. Now take a look at your anchor rode. How many knots do you have in it? Did you put knots in at every 50 feet or so,as the old mariner’s tale teaches? Well, luckily you found out now.Some urban (or nautical) legends can be dangerous.

Most importantly, use the right line for the right job, and inspect your lines often for wear and tare.